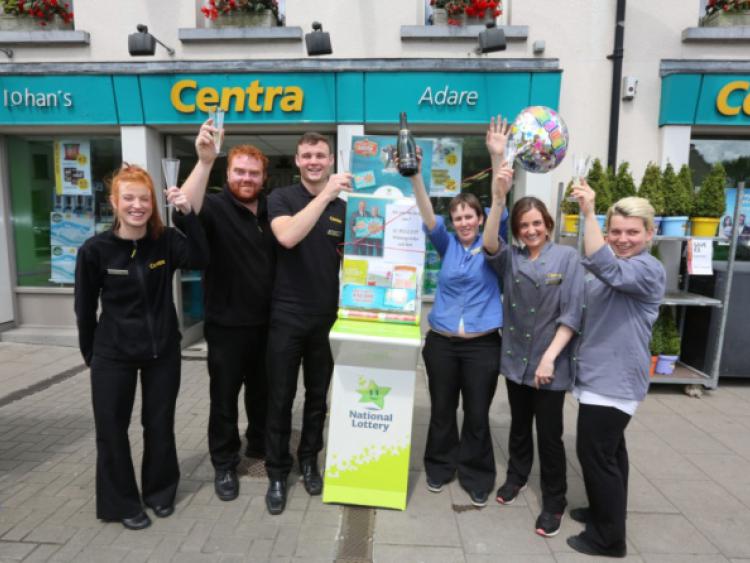 THE lucky winner of a massive €2 million jackpot National Lottery prize, bought in Limerick, has collected their winnings.

The winner, who wishes to remain anonymous, bought her winning ticket on Saturday 27 June last in Adare. The winner picked up a cheque for a cool €2m in National Lottery offices in Dublin last Thursday, celebrating her fantastic good fortune with a glass of champagne.

“I was driving through Adare and a spot was free outside the shop, so I popped in and bought an ice-cream and a Lotto ticket. If the spot wasn’t there, I would have driven on past,” she said.

The €4 Quick Pick ticket, bought in Lohan’s Centra supermarket on the Main Street in Adare, won the €2 million Lotto jackpot prize in that night’s draw.

Asked how she would spend the winnings, she said: “I’ll not take-off on a cruise just yet, but I plan to share it with the family.”

The win sparked a wave of excitement and speculation among staff and shoppers in the days and weeks since the news broke in Adare.

“It’s brilliant, there is a nice buzz around the place and hopefully the winner will come forward but we have no idea who it is,” Louise Cusack, a supervisor at the store told the Limerick Leader soon after it emerged the shop sold the winning ticket.

Andrew Lohan, who runs the store with his brother Jeff, said it was a major boost for everyone associated with the business.

“This is the first time we have sold a winning ticket and we are delighted we sold it. We have a lot of tourists calling into the shop but we also have an awful lot of local people buying the Lotto in the store so hopefully we can keep it local,” Mr Lohan said.

The €2m Adare win followed on another Lotto Jackpot in Limerick in June last year.

On that occasion, a family syndicate from County Limerick shared a €2m jackpot after buying a €4 quickpick at Ryan’s Raheen Foodstores the day before the draw.

According to the National Lottery, the biggest Lotto Jackpot win in Limerick happened in 2011. On New Year’s Eve, the jackpot of €4,164,479 was won by a ticket-holder who bought the ticket in Chawke’s, Dublin Road, Castletroy.