Kilkenny man generously rises to the occasion for Limerick quads 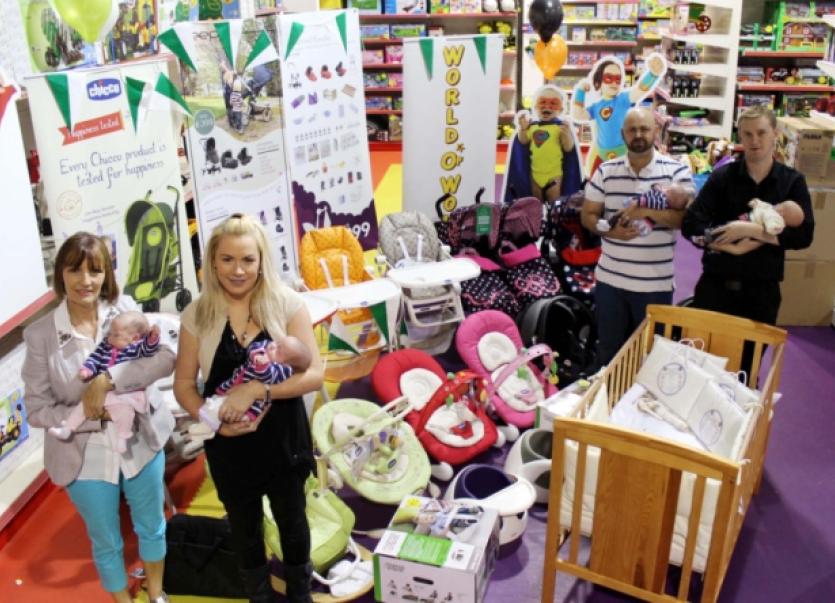 LIMERICK hurling fans will be hoping the Kilkenny hurlers will be as generous on Sunday as one of their county men was last weekend.

LIMERICK hurling fans will be hoping the Kilkenny hurlers will be as generous on Sunday as one of their county men was last weekend.

“We had read about the quads and by chance James’s sister Ursula was in here asking about car seats for them. We said we would definitely try to do something for them and it grew from there,” said Wesley.

It certainly did and the photograph shows just how many baby products and accessories the Slattery family took home to Caherconlish.

“We are a Limerick company, we are members of the community and it’s nice to be able to give something back,” said Wesley.

Manager of Limerick Sports Store, Christy Williams, said they were delighted to present the quads with their first Limerick jerseys.

James and Grace said they were blown away by all the generosity and thanked everybody involved.

“It’s unreal, the stuff we have gotten - it’s everything we need,” said Grace.

James said: “They’re very generous, we wouldn’t have been able to get any of this stuff without World of Wonder’s help. It’s amazing really. We didn’t have car seats to even leave the house so they were very generous to help us out with the car seats to even get in here in the first place. And without buggies we couldn’t even take them out for a walk but this week they’ll be out for their first walk,” said James.

“We’re suddenly mobile, we can leave the house!” smiled Grace.

After Wesley first made contact with Grace and James he found out exactly what they needed.

“Chico were the first company to come on board, they offered us four high chairs and four bouncers. Mamas and Papas gave us four baby snugs and a changing bag. They already had two cots so I got onto Baby Elegance about that. They supplied us with two cots and four Irish made baby pillows.

“It wasn’t practical for them to have four single strollers, so we went to Cosatto and they offered us two Supa Dupa double strollers, they’re the new ones out on the market - top of the line with all the specs on them. They actually have speakers in the hoods so you can play music to the children,” said Wesley. As there is three girls and a boy one stroller is all pink while the second is for a ‘sis and bro’.

“I contacted Be Safe as well – they already had one car seat because they needed it for transporting the babies home from hospital so they were looking for three car seats. I got three car seats - they are the best on the market at the moment in my opinion. They’re Norwegian made and of a very, very high safety standard.

“We got a great response from all the companies,” said Wesley. The Kilkenny man came up trumps and he thinks his team will do the business on Sunday too.

“I’m confident given past meetings but I suppose it’s not the same team that we met in the past either. They have a very impressive win under the belt from Wexford but whether they’ll score four goals against Kilkenny...

“It’s always a bit of fun. There will be a few fivers going on between the staff. I’ve been lucky so far with the bragging rights but it has to turn the other way too you know,” said Wesley, who has been in Limerick for eight years after marrying local lady Siobhan Siochru. He had no problem buying green and white bunting but the best he could find for Kilkenny was a black and amber balloon!

Thanks to Limerick Sports Store they have the perfect attire for the 10-week-old babies to wear on Sunday.

Grace and James are big hurling fans and were talking about buying jerseys before Limerick Sports Store kindly gave them. And James doesn’t’ agree with Wesley’s analysis!

Looking at his beloved girls and boy he said: “Ye’ll be wearing your jerseys and cheering them on won’t ye? They might bring a bit of luck to Limerick. We’ll beat the Cats!”

“Limerick Sports Store have been very kind. We’ll be back in for the bigger sizes when they get older,” he added.

The only problem on Sunday is that the babies are due a feed every day at 4pm so the couple will have their hands full during the game. The thriving babies and Limerick hurlers are both hungry for success.