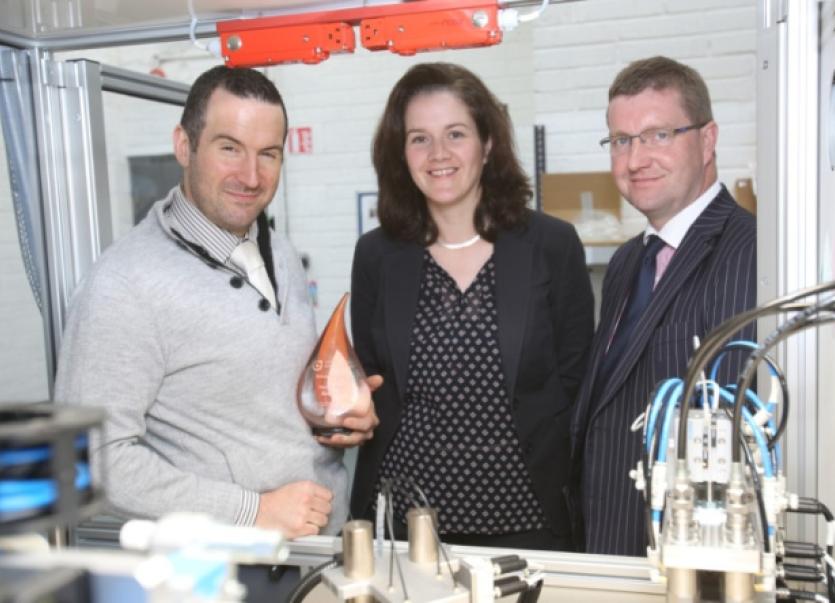 A CASTLEMAHON company which designs and builds mechanical, automated and semi-automated machines for assembly and production lines, has won the county’s top Enterprise Award.

A CASTLEMAHON company which designs and builds mechanical, automated and semi-automated machines for assembly and production lines, has won the county’s top Enterprise Award.

Paul Collins, who heads Design Pro, has won the Entrepreneur of the Year prize at the Limerick County Enterprise Awards held this week.

Now, he will go forward to represent Co. Limerick at the annual awards at Dublin Castle next month.

Sligo IT graduate Mr Collins founded Design Pro in 2004 after spending time working with Molex in Shannon and Kostal in Abbeyfeale where he gained experience in toolmaking and machine building.

Speaking after picking up the award, he said: “It is with great pride and recognition I receive this award from the County Enterprise Board, and to have been further selected as a finalist in the National Awards.”

Since 2004, Design Pro has become a leading provider of provision automation and machine build services, with 32 client companies in the medical devices, pharma, electronics and automotive sectors.

It has also carved out a niche in the area of robotics and have recently completed the design and build of a customised robotic machine worth €1.5m.

Its client base includes Oral-B, Molex, and Boston Scientific.

Mike Cantwell, the chief executive of the Limerick County Enterprise Board said they have been “delighted” to work with the company.

“The business has proven to be one of the most innovative projects that the Board has worked with over the years and this has led to Design Pro being selected to represent Limerick County Enterprise Board at the National Enterprise Awards final in Dublin Castle on November 7.”

Meanwhile, the George Boutique Hotel in the city centre played host to the Limerick City Business Awards this week.

Deputy mayor Cllr Maria Byrne presented the prize for the Entrepreneur of the Year 2013 in the city to Garryowen man Kieran Fitzgerald of Corenex, based in the Galvone Industrial Estate.

Kieran founded the company in 2004.

Having worked in kitchens, he saw the wastage which occurred.

Corenex specialises in environmentally friendly deep cleaning services for the food industry. His clients include Barrington’s Hospital, Superquinn, Supermacs and a number of hotels in the Midwest region.

“We are so proud to win this award. It’s the culmination of years of hard work and a commitment to service excellence. When the recession hit we found ourselves challenged to find innovative ways to grow our business. Key to winning sales is our ability to quantify the potential savings to our clients in using our services. Our customers expect both quality standards and improvements to their bottom line,” he said.

Other winners at the City Enterprise Awards included Sheehan of Unison Engineering Services, which provides maintenance for homogenisers, heat exchangers, pumps and valves.

Meanwhile, Shane McAllister of Mobanode, based in the city centre, took the Innovation Award, and Kristi O’Kelly of Corbally seafood firm Silver Darlings, who won the prize for the best start up company.

Michael Hogan of Alnico Technologies Ltd, based in Howley’s Quay, was named the businessman whose firm had the best growth potential.