Counting the emotional cost of the floods in Limerick 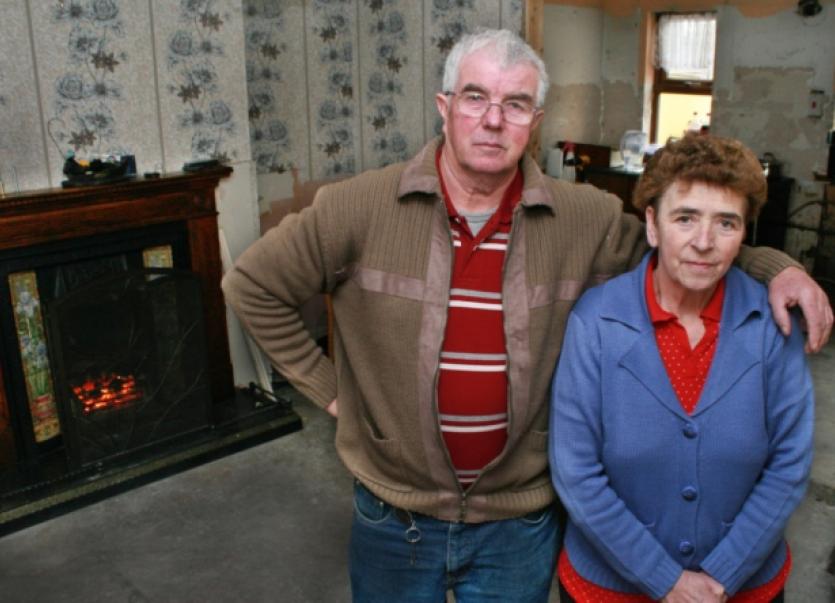 ‘A HOUSE is made of bricks and mortar. A home is made of love of dreams’, reads a wall hanging in Bridie Boland’s home at No 12 St Ita’s Street.

‘A HOUSE is made of bricks and mortar. A home is made of love of dreams’, reads a wall hanging in Bridie Boland’s home at No 12 St Ita’s Street.

But since the worst flooding the city ever witnessed five weeks ago this Saturday it doesn’t feel like the same home any more.

Nor does it to her neighbours, and many of the residents across the sprawling King’s Island, where sandbags are still piled high in a make-shift fortress against the mighty Shannon.

Sitting by the electric fire, which has been on constantly to dry out her home since the floods, 85-year-old Bridie said she’s still waiting for life to return to some degree of normality.

“We’re all upside-down over the floods. Everybody was in the same boat, so I couldn’t ask anyone to come in and help me.

“I had to use most of my bath towels to dry up the kitchen myself. I dried the kitchen first, and I was aching from pushing the brush with the towels. I sat down then to make a cup of tea before I started on the front room.

“I couldn’t believe my eyes when I saw the water up as far as the railing outside. I was upstairs in bed, when a man shouted up to me ‘Are you alright up there?’ But I didn’t leave.”

“It did dry up quickly when the heating came on, but we’ll know what the cost is when the bill comes in.

While most of Bridie’s privately owned home was spared the worst, the cost of the repairing the two floors could come to €3,000 at least to repair. She is hoping that council workers may come in this week to repair the damage, following the most recent announcement of €1.3m in funding for those affected in Limerick.

The mother of five, whose children have all flown the nest, has been living here for over 20 years. Her next door neighbour Michael Mason, 74, who is also a widow, checks in on her every day to make sure she’s Okay, and drives her to the shops.

“Oh, the neighbours are the best,” she added optimistically, in spite of the worry etched on her face.

Apart from the physical damage to her home, Bridie said she was lucky she didn’t lose too many personal possessions, but like many, the emotional cost of the floods and its aftermath appears to have taken its toll.

One of her prized possessions - a framed, signed photograph of the TV star Judge Judy, a gift posted by her sister for her 80th birthday, is still sitting safely on the mantelpiece.

“I was waiting for a long time to buy a pair of shoes. I bought a pair of shoes in the sales in Leavy’s the day before and left them downstairs that night, and the next morning when they floating in the water. But it could be a lot worse.”

Next door, Michael, whose wife Bridget passed away 11 years ago after 38 years of marriage, saw all his wedding photos ruined in the floods, and was forced to throw them out.

His 2002 Nissan Primera was also destroyed, but while it was insured for fire and theft, it was not covered for flood damage.

Seanie Quinlivan, a father of five from 6 St Ita’s Street, has been one of the most outspoken advocates for the victims of flooding across King’s Island, and along with others submitted a detailed 25-page report on issues surrounding the flooding to the Taoiseach last week.

Seanie said that he’s still cooking in a ‘contaminated’ cooker, which his wife Margaret, who has TB in both lungs, cleans out every day in an attempt to avoid further health risks. The situation looks bleak - all around them are bare concrete floors, and torn stretches of wallpaper. “We went to the credit union and borrowed a few bob before the €1.3m was announced, but the council said they’re going to give us a timber floor now.”

The 67 year-old, who has resided there for the past 46 years, said the psychological problems affecting residents coping with the aftermath of the flooding is another issue that must be examined.

“People are still very, very angry; people that you wouldn’t ever hear a harsh word from,” he said.

Athlunkard Street resident Dr James Ring, a private home owner, said he has “lost hope” in the country, after damage worth some €50,000 was caused to his home, for which he could not obtain flood insurance. He has received a cheque from the State for a mere €2,883 to date. “What good are appliances and furniture in a house with no internal walls, serious structural damage and without power and heat?” he said. This Saturday it will be five weeks since he was last able to sleep in his own bed, lock his front door and feel secure in his home. His home, too, is a home no more.