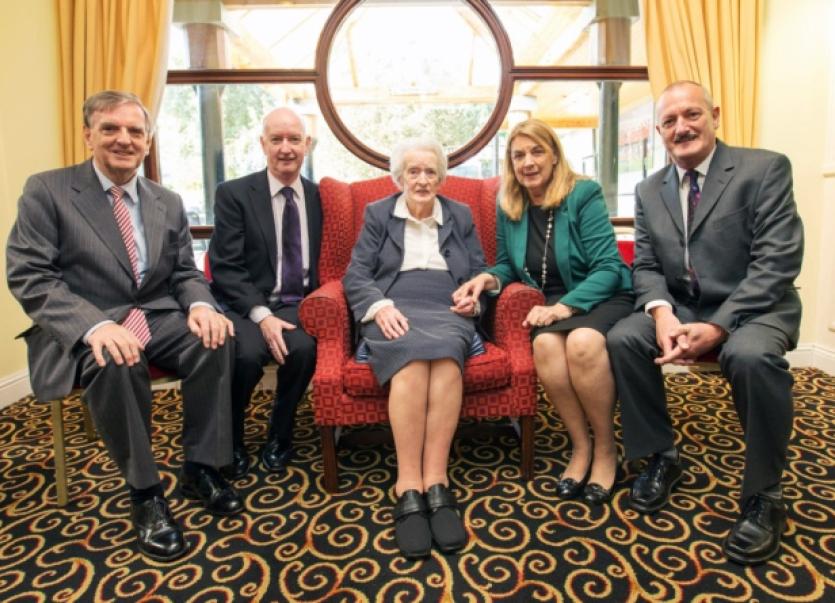 AT THE age of 100, Kathleen Tierney doesn’t know why God has blessed her with such good genes, but she believes her faith - and a love of playing bridge - may have played a part in her longevity.

AT THE age of 100, Kathleen Tierney doesn’t know why God has blessed her with such good genes, but she believes her faith - and a love of playing bridge - may have played a part in her longevity.

Celebrating her 100th birthday this Monday, Kathleen, who has lived in Lansdowne Park for 66 years, again began her day as she has always done - with mass at Our Lady of the Rosary Church on the Ennis Road.

Not only did she receive a letter of congratulations on reaching this special milestone from President Michael D. Higgins, she also received a surprise visit from singer Daniel O’Donnell who sang ‘Happy Birthday’ to her in the Park nursing home prior to his recent concert in the University Concert Hall.

One of seven children originally from Galway, she is the oldest surviving member of her family, and the mother of five has seen the circle of life continue to grow, with 10 grand-children and nine great grand-children.

Kathleen says she has no special secrets to divulge for those seeking to live to a great age, except that she doesn’t smoke, and doesn’t drink, apart from the occasional sherry on a special occasion.

“It’s God that did it. I’m a strong Catholic,” she told the Limerick Leader, as she celebrated her birthday with family in the Greenhills hotel this week.

While she is now a resident in The Park nursing home in Castletroy, up to her 90s she volunteered with St Camillus’ hospital with the ‘friends of the elderly’ - and was in fact many years older than many of the residents she went to spend the day with and keep company.

Born in Galway in 1913, she met her husband John while singing in the choir in St Joseph’s church. They moved to Limerick in 1947, and sadly, he passed away in 1968.

While the number of people aged 100 or more at the present time is not currently available from Government departments, the Department of Social Welfare and Protection said the Centenarian Bounty - awarded to those aged 100 or more to Irish people living in the State and abroad - was presented to 379 people in 2011, with 132 awards issued up to May 2012.