Racing world turns out for charity raceday in Limerick 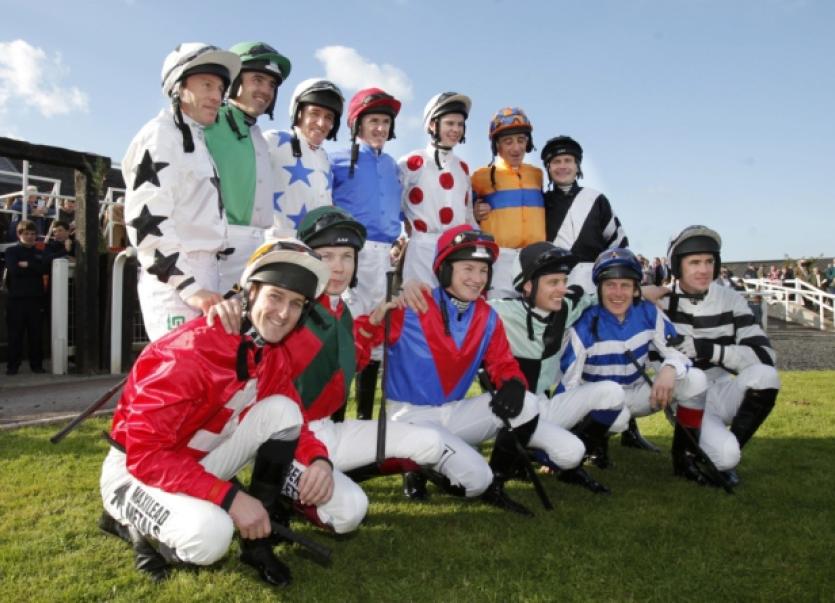 MONDAY was a day to remember; the day in which the fighting spirit of jockeys JT McNamara and Jonjo Bright was celebrated and the day on which Irish racing, and their British friends, demonstrated its big heart.

MONDAY was a day to remember; the day in which the fighting spirit of jockeys JT McNamara and Jonjo Bright was celebrated and the day on which Irish racing, and their British friends, demonstrated its big heart.

As things panned out, it was also the day on which Irish racing showed its more humorous side as jockey Johnny Murtagh was doused in champagne and dunked in water after accepting the winning trophy for the sixth race on Goal. The unique race, sponsored by Betfair, involved Irish and British flat as well as National Hunt professional and amateur jockeys.

“I was lucky,” Murtagh told a delighted audience. “We got a lovely run-around. It’s a wonderful day, with great jockeys, huge support. I was very grateful to be asked to come. Bad things have happened but God is good.”

But, having been dumped into a water trough by fellow jockeys such as Ruby Walsh and Tony McCoy, Johnny got his own back, racing after them with his own bucket of water.

It was all a bit of high-spirited fun on a day when the dangers of horse-racing were in everybody’s mind and on everybody’s lips.

Over 10,500 made their way to Limerick racecourse for the special Limerick Charity Raceday for the Injured Jockeys Fund. The fund was set up for jockeys who suffer permanent total disablement and unfortunately, Croom’s JT who is 37 and 19-year-old Jonjo Bright, must now rely on the fund for the care they need following their severe injuries in racing accidents.

Minister for Agriculture and Food, Simon Coveney summed it up for everybody when he said that the lives of JT and Jonjo had been turned upside down as a result. Now, he said: . “They face massive challenges as do their families.” But the money raised would hopefully help ease some of the challenges, he added. “There is a very clear sense of solidarity here. There are some people who take jockeys for granted. But these are athletes who take huge risks with their own physical health. They make the sport what it is.”

Over €550,000 was raised at Monday’s event, through the gate fees and a high-yielding auction but significantly also through the decision by everybody involved, jockeys, owners and trainers to donate fees and winnings.

For many, it was all about showing JT and Jonjo that they were not alone.

“It’s an unbelievable turn-out,” trainer Aidan O’Brien said. “Everybody knows the dangers. Day in and day out, they put their lives on the line for everybody’s enjoyment. When anything happens, we all have to be here, to tell them how much we are behind them. Everybody stands together.”

“Everybody knows how much it means to the boys,” Paul Carbery said. “It is going to be great for them and will give them a bit of a lift.”

“This is a fantastic sport. It is also a dangerous one. We all grow up thinking it is not going to happen to us,”

(Incidentally, Tony left his underpants behind after the race, and they fetched an astounding €5,500 at the auction afterwards.)

Matt Chapman, presenter of British racing channel Attheraces was highly impressed with the day, a day on which incidentally, Britain beat Ireland in the five challenge races. “It is rare that jockeys would come from Britain to a charity day,” he said. “It just shows you how close the racing communities are. It is a magic turn-out. The people of Ireland should be very proud.”

And while Monday was mainly peopled by racing fans from every corner of the country, they were not alone. Former Irish footballer and Sunderland president, Niall Quinn was among those who attended as was former Manchester United star and current Hull manager Steve Bruce.

“It is great to be here,” grinned.Danny O’Reilly, of the Coronas, who admitted he was a recent convert to racing. The band had decided to donate a guitar signed by all its because “we thought it was a great cause”., he said.