Dog recovering after being rescued from fire in Limerick 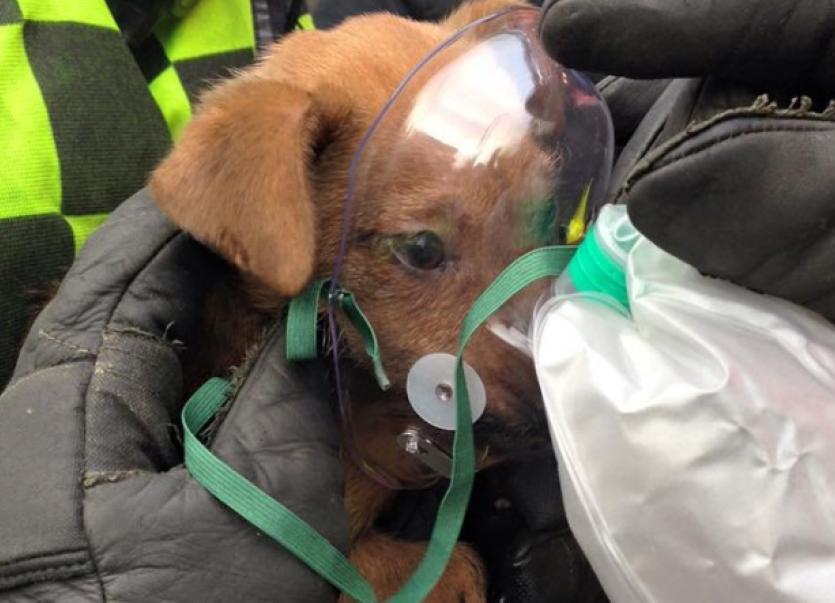 A PUPPY dog has been revived after being rescued from a burning home on the southside of the city.

A PUPPY dog has been revived after being rescued from a burning home on the southside of the city.

Members of the Limerick City Fire and Rescue Service used a special oxygen mask to ensure the baby dog was not overcome by smoke after it was rescued from the house fire earlier in the week in Byrne Avenue, Prospect.

The residents of the house were not in the home at the time of the blaze, which is believed to have been a suspected arson attack.

But after the Limerick City Fire and Rescue Service received calls from concerned neighbours, officers were despatched to the scene.

Firefighters arrived in Byrne Avenue to find smoke and flames shooting outside the house, according to Peter O’Toole, Limerick City Fire and Rescue Service.

He said: “There was nobody else in there. But we had calls from concerned neighbours that somebody could be trapped in the house. So naturally we went down there all guns blazing. We had two crews committed to the building. It was pointed out to us there was a dog missing. Although we were sure there was nobody [human] in the house, we then managed to fish him out. He was a little worse for wear, so that was what the oxygen was for.”

The dog’s breathing was believed to be suffering, and pulse weakened as a result of extended smoke inhalation.

The fire service took to its Facebook page to post a picture of the pup with its oxygen mask on, being held lovingly by officers to keep it from the cold and chilly weather.

In an accompanying post, they wrote: “Though he’s had a ruff morning, we’re happy to hear he is expected to make a full recovery”.

The dog was passed to the father of its owner, who lived in the house.

He is looking after it for the time being. Gardai at Roxboro are investigating the fire, and can be contacted on 061-214340.