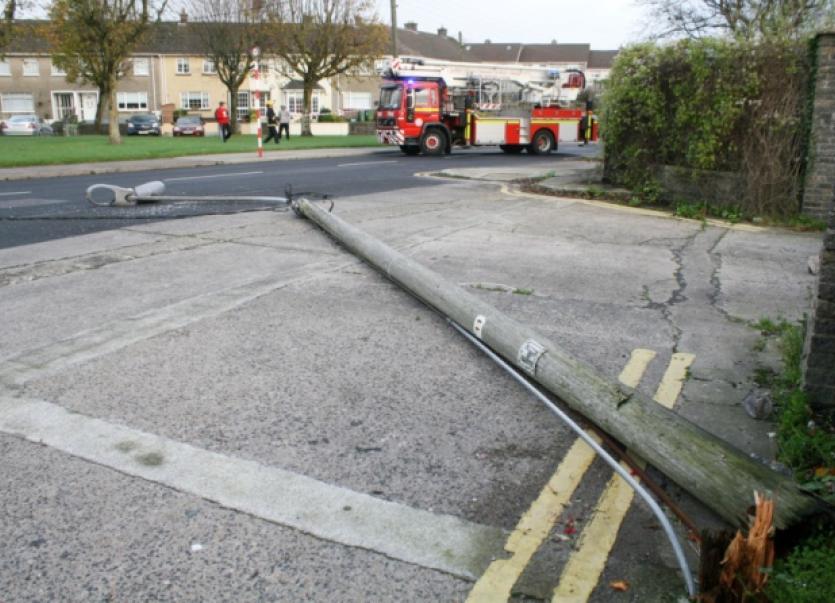 WINDS measuring more than 120kmh have been recorded at Shannon Airport this Tuesday as Storm Barney touched down in the region.

WINDS measuring more than 120kmh have been recorded at Shannon Airport this Tuesday as Storm Barney touched down in the region.

Limerick has been battered by high winds, with telephone poles down in the city on Carey’s Road and the Ennis Road, while heavy rainfall has added to dangerous driving conditions.

Met Eireann earlier issued an orange weather alert for Limerick, warning of high winds when the so called ‘Storm Barney’ hit. The alert, which came into effect at midday, warned of the likelihood of gusts of to 125kph until 9pm today.

The weather body said there would be stormy conditions this evening, with south west winds veering westerly and bringing “severe/damaging gusts” with an orange wind warning in operation for Munster.

There are reports of fallen trees across the county which are affecting traffic conditions, reportedly in Adare and on the road from Cappamore to Pallasgreen.

There are also a number of power outages with customers on the Dock Road, Southill, Croom and Rathkeale, Newcastle West and Foynes suffering a loss in service. The outages are expected to be fixed by 6pm.

Limerick City and County Council has advised members of the public to avoid travel where necessary due to forecast storm force conditions.

“It is important that members of the public pay attention to Met Éireann’s advisory as this weather system has the potential to deliver Storm Force 10 winds to Limerick for a period during the afternoon to early evening,” said a spokesperson for the local authority.

“Members of the public are advised to remain indoors where possible during the storm and to stay away from rivers and other water bodies.

“The Council is on full alert and will respond to emergencies as they arise or as it is safe to do so,” the spokesperson added.

Gardai have also appealed to all road uses to “exercise extreme caution” on the roads this afternoon and evening in light of the weather warning.

“With high south westerly winds forecast motorists are advised to slow down, maintain a safe driving distance and always expect the unexpected,” it said, noting that the warning was in place for Limerick until 9pm this Tuesday.

“Gardaí are advising drivers of high sided vehicles, motorcyclists and cyclists who are particularly vulnerable to strong winds to take extra care. Road users are advised to contact local Gardaí if they come across any fallen or falling debris across the road network.”

Send your weather photos or reports to news@limerickleader.ie