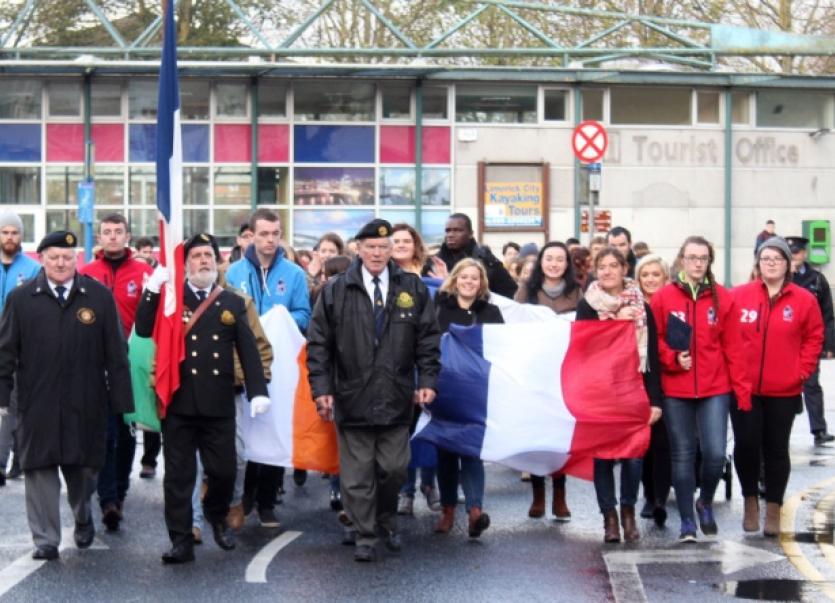 A MARCH in solidarity with the local French community, following on from last week’s terrorist attacks in Paris, took place in Limerick city centre this Friday afternoon, organised by students at the University of Limerick.

A MARCH in solidarity with the local French community, following on from last week’s terrorist attacks in Paris, took place in Limerick city centre this Friday afternoon, organised by students at the University of Limerick.

Representatives who attended the march included international and Erasmus students, members of An Garda Síochána, delegates from Alliance Francaise de Limerick and the French Embassy and the elected members of the UL Students’ Union.

Honorary Consul Marie Hackett told the Limerick Leader at the march, which kicked off at Arthur’s Quay at 1pm, that local support for the French community in Limerick has been “so strong”.

“The Limerick response has been great. We have opened a book condolences at Alliance Francaise, at Pery Square, and we have got hundreds of signatures and a constant flow of people coming in. Children, older people, business people, it was really humbling.

The short march, which ended at the People’s Park, was also attended by a delegate for French Ambassador Jean-Pierre Thébault. Consul Pauline Tanchoux-Janin said that Ambassador Thébault was “very appreciative” of the UL students’ efforts.

“I am very impressed. The Ambassador wanted somebody to be because all around Ireland, and in Limerick, the French students and Irish students want to say that they don’t agree what’s happened in Paris, we support France, we are with you,” she said.

Leading the march — and flying the French flag — were members of the local Organisation of National Ex-Service Personnel. President Hugh Ryan said that it is “important to show respect” during “these sad times”.

Behind Mr Ryan, holding the Irish tricolour, ULSU president Colin Clarke said that they wanted to “stand beside our students in the French community, here in Limerick, in a time of need”.

“Limerick and Ireland, in general, has a great sense of community, togetherness, and we are really trying to make that resonate that in UL. We are pride ourselves on being a wolfpack, and being part of that wolfpack means being united in times of tragedy, as well,” he said.