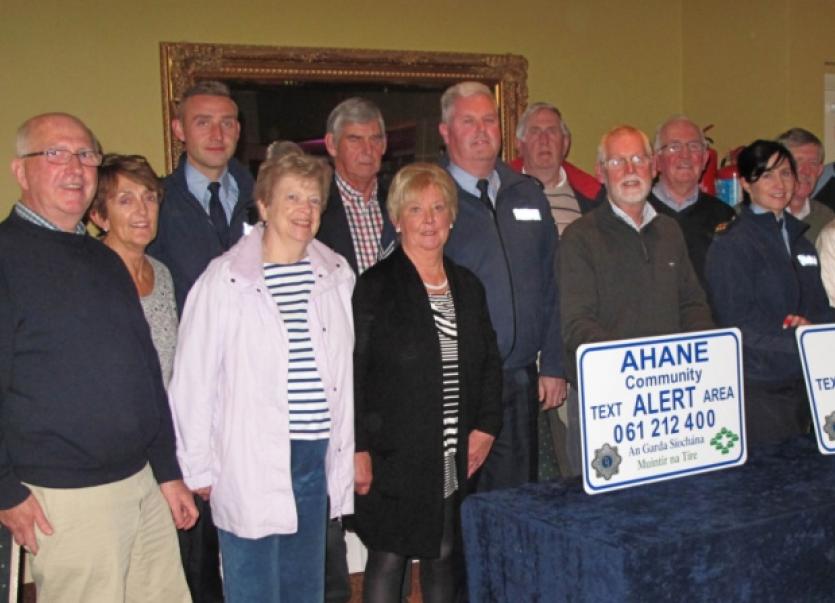 AHANE is the latest county Limerick community to come together to set up a text alert network.

AHANE is the latest county Limerick community to come together to set up a text alert network.

The secretary of the committee, Pat Brosnan, said the motivation was awareness of “a sense of fear which is a reality across rural communities”.

“We also identified a number of occasions where people were broken into and had to deal with raiders face to face,” said Mr Brosnan. Text alert is designed to give a greater sense of security and safety to those living in rural areas, and prevent crime.

John O’Dwyer, chairman, said the launch in the Castle Oaks Hotel was the “culmination of months of preparation in setting up the scheme”. More than 250 have joined.

“It works on the principle of shared responsibility for crime prevention across a local area, and that every person in a community can contribute to improving the quality of life and safety, keeping a look out for neighbours and bringing any suspicious activity to the attention of the gardai.

“I would like to thank the interim committee and volunteers from across the community who contributed in getting the scheme up and running,” said Mr McDonagh, who expressed appreciation to the local clergy and gardai for their support and encouragement. Sergeant Bernard McDonagh, Castleconnell; Sgt Justin McCarthy, crime prevention officer and Garda Ciara Gaynor, local liaison officer, have all been involved.

Mr O’Dwyer acknowledged the advice and support received from Diarmuid Cronin, Muintir na Tire - who have developed it in partnership with gardai – and Limerick City and County Council.

Sgt McDonagh emphasised the importance of text alert as a means of letting locals know about potential dangers in their community.

“It is a two-way communication process. Along with the gardai the whole community is alert and vigilant,” said Sgt McDonagh, who assured attendees of the full support and commitment of the gardai. A text alert works by partnering a local community with their nearest 24-hour garda station – Henry Street in this instance. It facilitates an immediate and cost-effective communication between An Garda Síochána and the local community.

Residents have an identified telephone number which can be used to contact gardai should they see anything worrying or suspicious that they feel should be brought to the attention of the authorities. Gardai then verify any details received and decide if the text alert system should be used to notify participating households to be watchful and report on any developments.

At the end of the meeting, Mr O’Dwyer acknowledged the generous sponsorship received from Seamus Hogan, manager of Castleconnell Ahane Credit Union and the support of Gobnait O’Connell and the staff of the Castle Oaks Hotel.