Anger in Limerick as charity clothing banks go up in flames 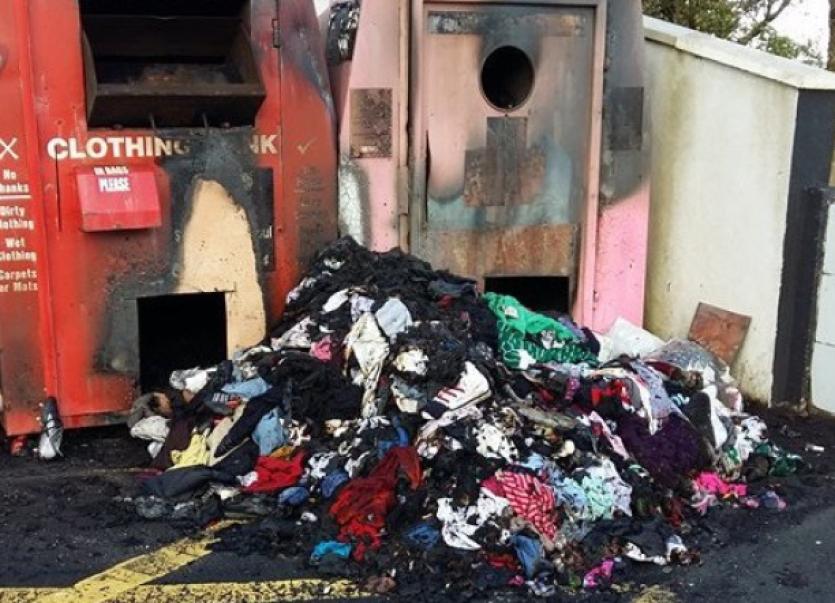 LOCALS in Kilfinane have expressed their outrage after two clothing banks in aid of two prominent charities were discovered engulfed in flames.

LOCALS in Kilfinane have expressed their outrage after two clothing banks in aid of two prominent charities were discovered engulfed in flames.

Fire crews were called to the scene of the blaze on Sunday morning and the incident is being investigated by gardai.

“It appears to have been mindless vandalism,” said local man Hugh Murphy who said there was much disappointment locally as the clothing banks are in aid of St Vincent de Paul and breast cancer care.

“It was blackguarding especially with the weekend that was in it - there was a big crowd around the town for the festival. There was a lot of outsiders around as the HearSay festival was on.”

A photo of the torched clothing banks began circulating on social media soon after the incident came to light, with local people using the online medium to voice their anger at what appears to have been a malicious act.

“There were clothing banks set on fire on Sunday and obviously we are following up in relation to see was it malicious or not,” said a garda source.

Comments left on Facebook under the photograph of the damage caused include, “This is just shocking and horrible. These could have helped a lot of people” and “That seriously is a new low. Sickened to see that. People just don’t seem to care what they do any more.”

The post which accompanied the photograph reads: “Charities really depend on these clothes to raise much needed funds. Not only were the donated clothes destroyed but also the containers, so are now just scrap metal.”

According to Mr Murphy gardai went around to businesses in the village to examine CCTV on Monday morning.

People are disappointed that something like that would happen – especially targeting clothes as people would want them.”