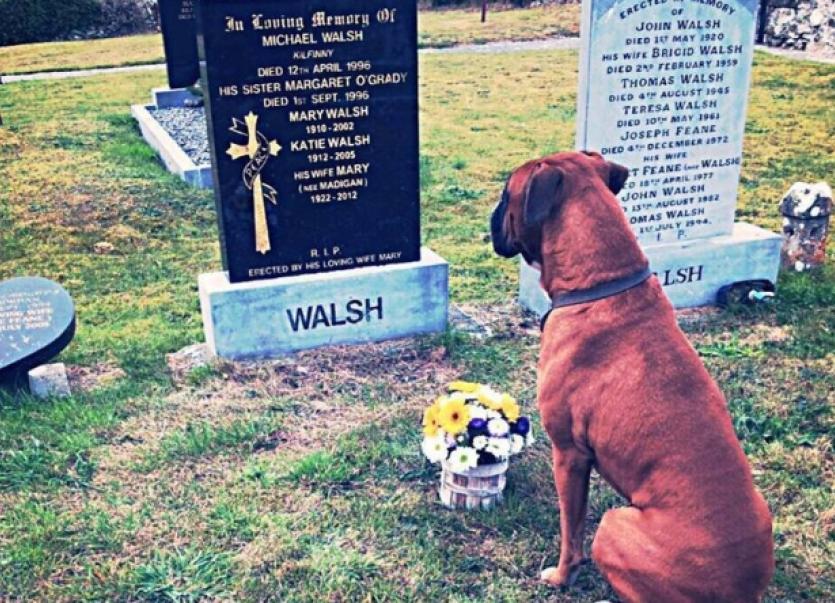 Tyler was just a puppy when Mary Walsh died but judging from this picture she still has a special place in his canine heart.

Tyler was just a puppy when Mary Walsh died but judging from this picture she still has a special place in his canine heart.

The heart-warming photo, taken by Mary O’Shea for a local photography competition, shows the mournful-looking boxer standing vigil at her granny’s graveside in Kilfinny cemetery.

“It was very poignant really for all of us,” said Kathleen O’Shea, daughter of the late Mary Walsh who was there when the photo was taken.

Three-year-old Tyler is owned by Kathleen’s son Thomas, who is currently working in Abu Dhabi.

The photo was taken during a family visit to the graveyard where Mary Walsh and other family members are buried in Kilfinny.

As Kathleen and her daughter were cleaning up around the grave, they were amazed to see Tyler take up a position at the graveside where he sat motionless, just staring at the headstone for several minutes.

Mary got out her digital phone and snapped a picture to send to Thomas.

“It meant something to her,” Kathleen said of the resulting image.

“We were really touched by the way he just sat there for more than five minutes without moving.”

“It was like he was saying a few prayers for his master,” she added.

Mary subsequently decided to enter the photo in the Kilfinny In Focus photographic competition being run by the local Community Council.

The aim of the competition was to encourage people to appreciate the beauty of the area by photographing local scenes.

Since then, it has touched the hearts of everyone who has seen it.

This photo and over 100 others that were entered in the competition are currently on display in Kilfinny community centre and on the community council’s Facebook page.

“This competition came about as a response to the feeling that we have become so busy looking at screens – be they phone, television or computer, that we have stopped looking at the beauty around us,” explained Ms Culhane.

The only rule for entries to the competition, organised by the Kilfinny Community Council and sponsored by the Rathkeale & District Credit union, was that the photographs had to be taken in and around Kilfinny.

“The entrants from three separate categories - adult, secondary school and primary school, did themselves proud. A diverse range of images were entered and all of these are currently on display in the hall,” she added. The winners in the adult category were John Shier, Noel Kiely and Lisa Mulcair while prizes for the secondary school section went to Aoife Murphy, Stephen Ruttle and Shane Prior. Odhrán Kiely, Emily Murphy and Aine Finn won awards in the primary section.