Dog ‘tortured’ in Limerick given new home in the UK 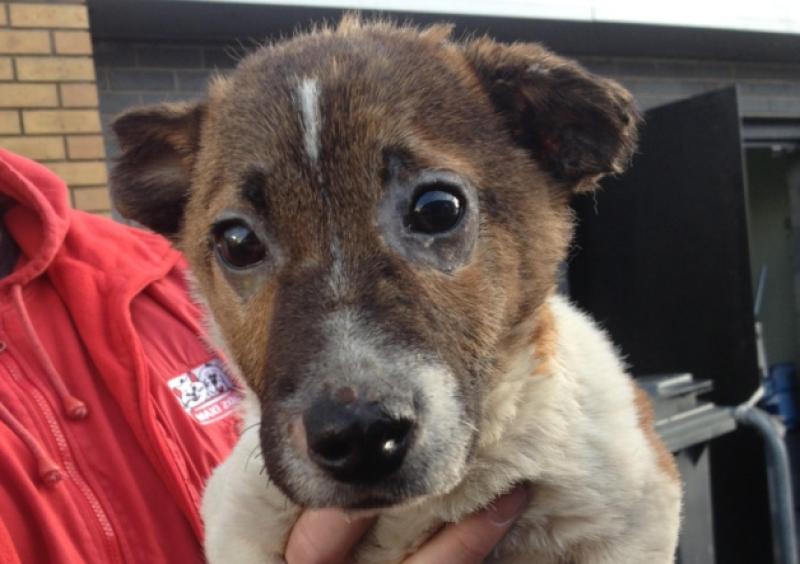 A PUPPY ‘tortured’ in Limerick has found a new home in England.

A PUPPY ‘tortured’ in Limerick has found a new home in England.

The public have raised over €3,400 for George, a five-month-old Terrier, to pay for veterinary operations. He was rescued by Limerick Animal Welfare (LAW) after being thrown over a wall in Southill.

George had a broken pelvis, an untreated eye injury, both hips broken, ear tips cut off, burns to his stomach and his whiskers singed off.

LAW’s Kilfinane sanctuary manager, Marie Quirke said he had been “tortured so badly that he is terrified of people.”

In the past three weeks he has been nursed back to health by LAW staff.

“George came home on Saturday from Noah Veterinary Clinic in Baldoyle where orthopaedic surgeon Billy McCartney performed an operation on both his hips to stabilise them using pins. He will need to be on strictly confined rest for four weeks to allow the healing process to work. He is on antibiotics and pain relief. Little George will need to have check-ups with John O’Dwyer, a vet in Henry Street to make sure everything is going well,” said Marie, who wished to thank Mr McCartney, all at Noah, Mr O’Dwyer and everyone who contributed to George’s veterinary care fund on their Facebook page.

“Any money over and above the cost of George’s treatment will go towards two other dogs in our care who also need expensive operations to injuries sustained in road traffic accidents,” said Marie.

After a terrible start to life for George is going to live in the lap of luxury for the rest of his days in England.

Animal lover, Coral Plunkett, got in touch with LAW.

“Having read the cruelty this little man suffered and the battle to recover which faced him I didn’t think twice. I contacted LAW and offered him a home with Matt, Connie and Hannah, also adopted from LAW.

“After speaking with Marie there was no hesitation on my part in naming him George, after St George. Unfortunately George is one of many, you could say he is one of the lucky ones. The work undertaken by LAW is just amazing and they are totally reliant on the generosity of people, so to have raised over €3,000 for George is just fantastic. Offering your heart and your home to a rescue animal is one of the best investments you will ever make, it will be repaid with love, loyalty and commitment,” said Coral.