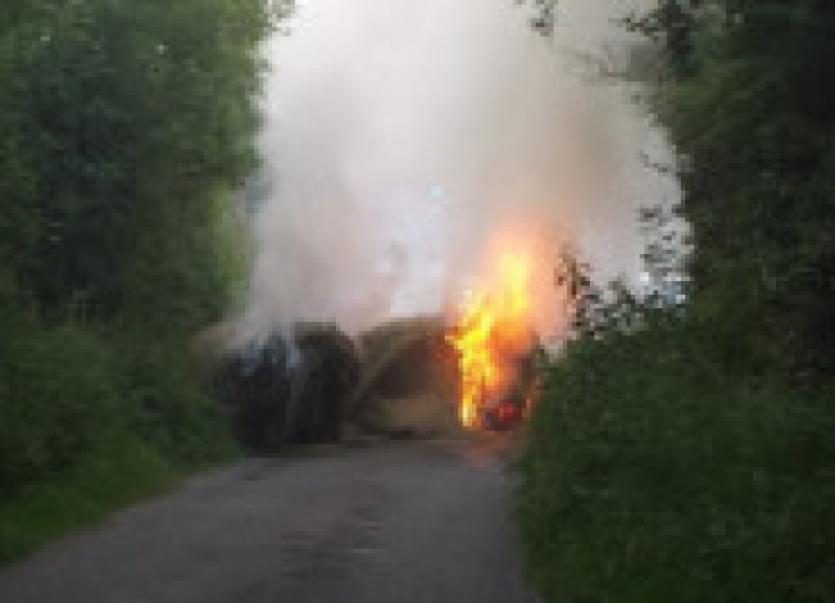 firefighters were called out to the scene of a blaze near Kilcornan after three bales of hay were rolled onto the road and set alight early on Sunday morning.

firefighters were called out to the scene of a blaze near Kilcornan after three bales of hay were rolled onto the road and set alight early on Sunday morning.

The alert was raised by local residents who were woken by the sound of dogs barking and discovered the burning bales.

The incident occurred on a narrow country road between Pallaskenry and Kilcornan.

“Three bales of hay were rolled out of a field and set alight on the road at around 5.30am on Sunday morning,” a spokesman for Rathkeale fire brigade said.

The hay was particularly dry following the recent spell of warm weather, which meant that it ignited very easily.

“We had to get a JCB to take the hay off the road,” the spokesman added.

One local resident said the three bales had been taken from a nearby field.

“At about five in the morning, myself and my husband woke up because the dogs were going mental. My husband got up and went outside and saw them.”

After trying unsuccessfully to quench the flames, the man contacted the gardai and fire brigade.

“We live on a very narrow road so normally we don’t get much traffic passing,” said the resident.

Following the incident, it was discovered that a number of farm gates in the area had also been opened but fortunately cattle which were in the fields had not strayed into the road.

In a separate incident, the windows of the GAA club in Pallaskenry were smashed by vandals on Friday evening. It is understood that there was no attempt to enter the building.

Gardai are investigating both incidents