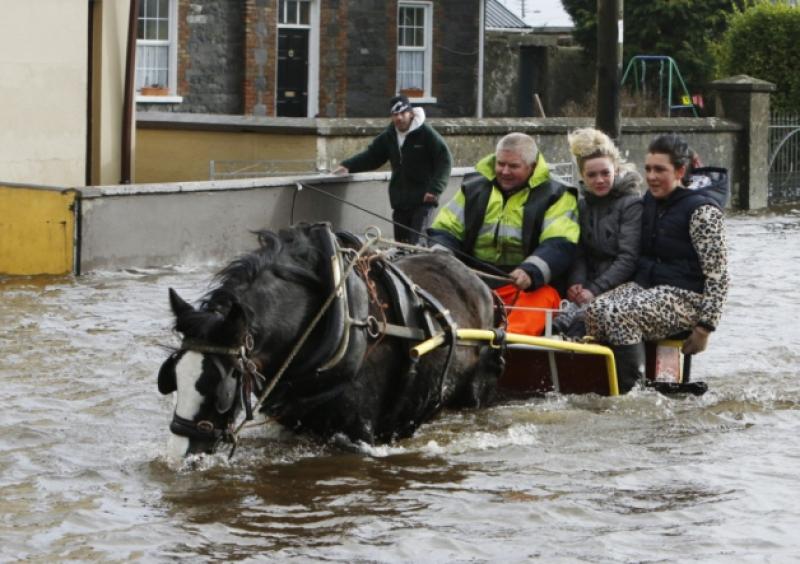 A LIMERICK man who estimates he carried around 200 flood victims on his horse and cart on Saturday is being hailed as a hero.

A LIMERICK man who estimates he carried around 200 flood victims on his horse and cart on Saturday is being hailed as a hero.

Ger Hogan, 57, from St Mary’s Park, put all three of his horses to work in rescuing and transporting residents after the Shannon broke its banks and flooded the Island Field.

“I was going all day,” said Ger when the Chronicle caught up with him on Monday. He had started at nine in the morning and didn’t rest until 8.30 on Saturday night.

“If I didn’t carry 200, I was carrying nothing. That’s the God’s honest truth. Everyone was asking for a lift, people looking to get out, people going in and out for messages or to take valuables out of the houses.

“I had to drop them off near enough Keane’s shop, where it was dry. There was no other way for them to get in and out - the water was up to the horse’s belly, four feet or five feet easily. I had children and elderly people, teenagers, all sorts up on it. Sure you couldn’t refuse them. When people get caught out, they get caught out. What can you do only your best for them? It’s as simple as that.”

As well as ferrying people in and out of their flooded streets, Ger and his animals also went to work delivering sand bags all over St Mary’s Park as fears heightened that there would be a second inundation with high tide on Saturday night.

Conditions were treacherous for man and beast alike and Ger said he had to take great care in making way through the muddy floodwaters.

“I was being careful because I couldn’t see the ground and I was worried the horse might fall with the speed ramps. He was feeling his way over them had one or two little trips but he didn’t fall, thanks be to God.”

Once one of his horses began to tire, Ger rode him out to Park, where he has another two animals stabled before returning to help out his neighbours and friends.

“I was going for a couple of hours and he was getting tired so I went off out the road and tackled him off and got another one of the shed out in Park. I brought him in and then when he got tired, I went off and had another fresh one out there. So I was able to work away during the whole day. But there was only so much I could do,” he said.

Ger’s own house on St Ita’s Street escaped flood damage but only a street away, homes were swamped by a three-foot wall of water.

“The unfortunate people on Oliver Plunkett Street are after getting completely washed out of it and they are still flooded there two days after.”

“I’ve never seen it as bad. I’m only a blow-in down here. I came out of the Abbey. But I was talking to a man 70 years of age, born and bred here. He was telling me never in his life had he seen water come up so high.”