Limerick’s Sophie, 7, moves from cot to her very first bed 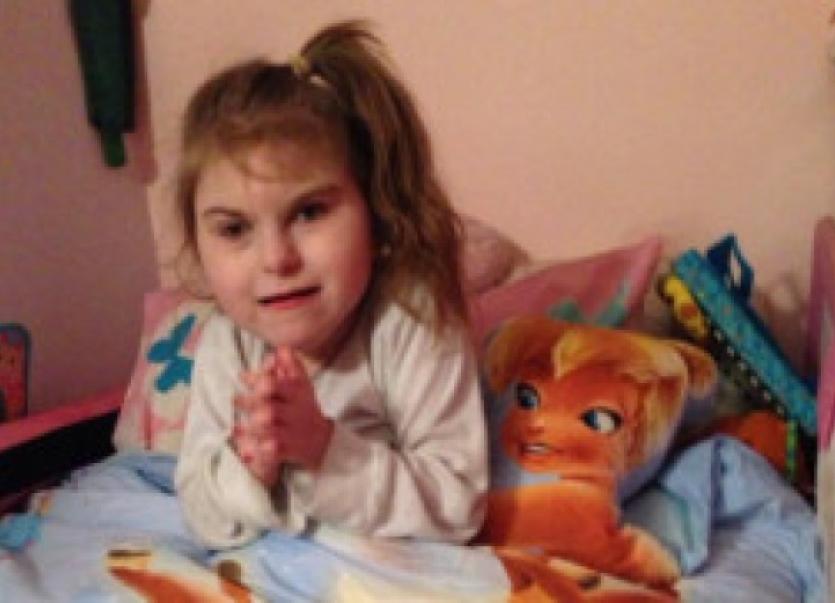 A COUNTY Limerick girl who suffers with a rare illness has reached a major milestone in her life - at almost eight years of age she is sleeping in a bed of own for the very first time.

A COUNTY Limerick girl who suffers with a rare illness has reached a major milestone in her life - at almost eight years of age she is sleeping in a bed of own for the very first time.

Sophie Mulcahy who lives in Rhebogue and whose father, Liam, hails from Kilmallock, suffers from a rare condition called 1q43 deletion and is one of only 40 known cases in the world.

Sophie spent the first six months of her life on a ventilator in Our Lady’s Children’s Hospital, Crumlin, and has already undergone six heart operations and other procedures.

“It’s a big thing for her. On Sophie’s scale, it’s huge progress,” said Liam of Sophie’s transition from a cot to her new bed. “She is in an actual full-size single bed. Obviously, it has got the supports on the side but it’s a massive milestone for Sophie. It’s always when Sophie is ready herself that she will make the move.”

There appears to be one slight problem however, the bedspread which features Tinker Bell from the Disney movie, Peter Pan, is not pink enough for young Sophie.

“It was donated to her by her sister, Kayla. It’s not pink enough. It has to be more pink - more Sophie,” Liam smiled.

Sophie’s condition, 1q4 deletion, means that the cells of the body have a small but variable amount of genetic material missing from one of their chromosomes – chromosome 1.

For healthy development, chromosomes should contain just the right amount of DNA. Like most other chromosome disorders, having parts of chromosome 1 missing may increase the risk of birth defects, developmental delay and learning difficulties.

While Sophie is unable to talk, she has her own means of communication. She can stand while supported but cannot walk. Up to now, she had difficulty sitting up by herself.

“The cot helped her when sitting up,” explained Liam who is the founder of the charity, Cycle 4 Sick Children. “A lot of Sophie’s physical core would have been poor and with the aid at the side of the cot, she would have been able to pull herself up. She would have low muscle tone with her syndrome. She wouldn’t have the muscle capability to do anything like that. Now she is able to do that without any help or support.”

Sophie, Liam said, has a real strong bond with her siblings Dion,13, and Kayla,5. She shares a bedroom with Kayla and has a habit of breaking into song during the night.

“At three o’clock in the middle of the morning, Sophie sings as loud as she can. She wakes up with a song and then goes back to sleep about 10 minutes later. It never seems to affect Kayla in any way,” smiled Liam.

The Kimallock man said that both he and his wife, Stacey, have seen real progress in Sophie - who is a student of St Gabriel’s in Dooradoyle - over the last two years.

“They are fantastic in St Gabriel’s. She can sit up, she can reach for things, she can hold things in her hand. She has good front control as they call it. When we brought her home initially, she couldn’t even lift her head off the pillow,” said Liam.

Such is the unpredictable nature of Sophie’s illness, she unfortunately has to be hospitalised from time to time.

“You get on with it. It’s not easy but if you don’t keep that positive switch on, it can eat you up.

“We keep ourselves busy on the charity side of things. The way myself and Stacey have always looked at it is we have always been lucky with her. There are people out there who aren’t as lucky as us.”

Sophie has had six heart operations to date and has also suffered kidney failure and been on dialysis.

“She had been through the mill but to see her smiling is amazing,” said Liam.

Meanwhile, over 45 people have signed up for the two-day cycle, Sophie’s Journey, which takes place on March 8 and 9 next and takes in the counties of Limerick, Cork and Clare.

Among those taking part in the event is former professional cyclist and journalist, Paul Kimmage - a dedicated supporter of Cycle 4 Sick Children. “Paul is doing both days. It’s about 150k each day,” said Liam. “He rang the other night to check up on Sophie and see how she is. He has donated money from presentations to Cycle 4 Sick Children.”