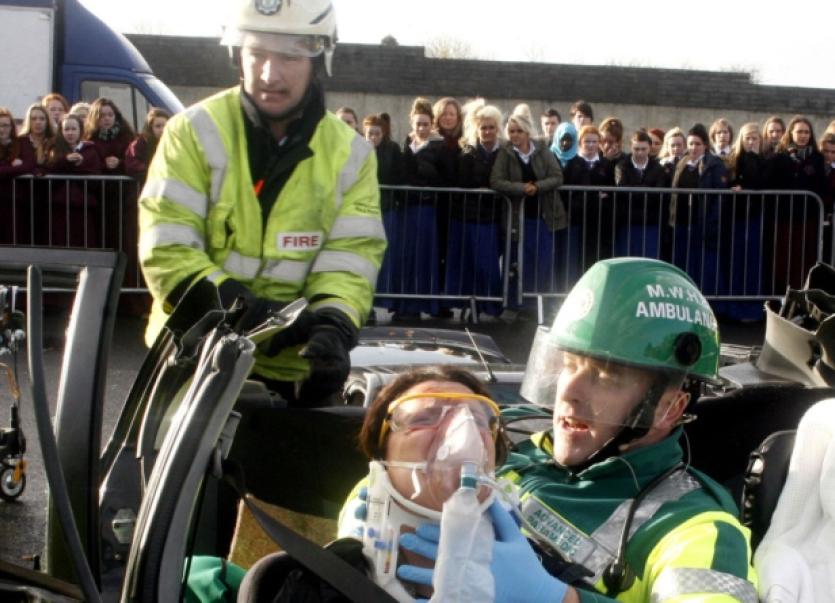 GARDAI are appealing to all road users and to young people in particular to change their behaviour in the hope of preventing further road fatalities in Limerick.

GARDAI are appealing to all road users and to young people in particular to change their behaviour in the hope of preventing further road fatalities in Limerick.

So far in 2013, six people have died on Limerick roads which is an increase of one compared to all of 2012.

The appeal was made as more than 1,500 students from across Limerick attended a series of road-safety demonstrations at the South Court Hotel in Raheen.

The Lifesaver project, which is now in its sixth year, is an honest and hard-hitting account of the reality of road safety in Ireland and is especially targeted at students and young people who are about to embark on their driving careers or who travel in cars with young friends.

As part of the multi-agency initiative, members of the emergency services replicated a two-car collision, involving a fatality.

“We had a driver and a passenger trapped in a car. The passenger was a brother of the driver who was deceased. She had to be evacuated from the car on a spine-board while the driver of the other car, which was on its roof, was out walking about with a head injury. He had a few pints taken, he was the cause of the accident and was arrested for drink driving and put in the patrol car,” explained Garda Tony Miniter of the divisional traffic corps.

As part of the demonstration, the students got to witness first hand how gardai, firefighters and ambulance personnel operate at the scene of serious road accidents.

The students also received presentations from members of the emergency services who have attended real-life crashes as well as from relatives of some of those who have been killed on the roads.

A number of people who have been left with severe injuries as a result of being involved in road accidents also described the impact it has had on their lives.

Project Lifesaver is led by An Garda Síochána in association with the Limerick Ambulance Service, Limerick City and County Fire Service, the Health Service Executive.

It is also supported by Limerick City and County Councils.