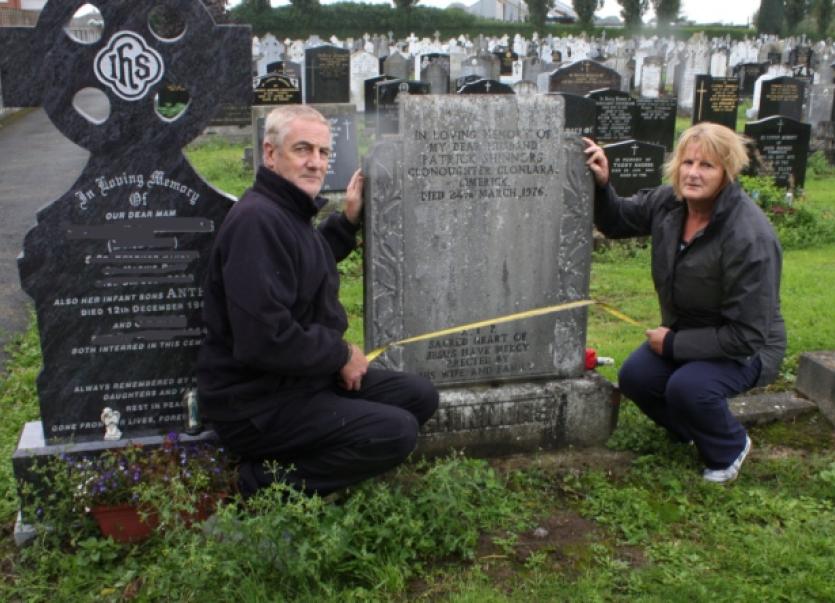 A LOCAL family say they have been left distraught and the remains of their late father “invaded” after another person was buried in his grave.

A LOCAL family say they have been left distraught and the remains of their late father “invaded” after another person was buried in his grave.

The Shinnors want their grave back as it was – and either the person buried in their father’s grave or their father to be exhumed.

Patrick Shinnors was buried in a double grave in Mount St Lawrence extension in 1976.Over two years ago his son Noel was called out to the cemetery to investigate a case of wandering horses.

“He went down to our father’s grave,” said Noel’s sister Geraldine, “and he saw it was dug up. He came to me and said, ‘Somebody is after being buried in daddy’s grave.’

“I said, ‘There can’t be’ so up we went – and they had a grave put in on the outside. They took part of the path and part of my father’s grave. There was no grave there for all those years so why suddenly did they put a grave in there over 30 years later?

“They have sold a grave that was not theirs to sell. We are all very upset and angry,” said Geraldine, who is from Parteen.

She wrote to Limerick City Council to complain and after correspondence back and forth contacted the Leader as she says she has hit a “brick wall”.

“From 1855 to 1979, it was run by the Catholic Church in Limerick, who delegated the day-to-day running to a local estate management company.

“From April 1972 to March 1976, the locations of burials was usually omitted, but other details were recorded as before.

“From March 1976 to November 1979, the register was not maintained at all so there are no records for this period,” said the spokesperson.

The Shinnors family do not accept this.

When Geraldine and Noel’s brother Eric died suddenly in London in 2012 it was planned that he would be laid to rest with their father in Mount St Lawrence.

“After we brought him home we were going to bury him there and I said what happens if we hit the other person’s coffin going in.

“We weren’t sure which side of the plot my father was buried on so we said we can’t bury Eric there and brought him to Parteen instead,” said Noel.

The Shinnors don’t know the person who is buried beside their father and stress that that family have done absolutely nothing wrong.

“We would have preferred to leave my father rest in peace but we are willing to bring him out to Parteen now,” said Geraldine. She says a double grave is 72 inches but after measuring the grave all they are left with is 58 inches. They found that when they measured the 72 inches from the edge of their father’s grave it came halfway in to the other person’s headstone.

“It is right up against our father’s headstone,” said Geraldine, who recalled her older brother Tom saying their mother Kathleen bought a double grave but they couldn’t find any receipts because it was so long ago

However, during her correspondence with the council she contacted Griffin’s who found in their archives that two graves were purchased.

“We had a family plot in the graveyard in Parteen but it was overgrown at the time and when my father was dying they couldn’t locate the grave at short notice in 1976.

“That’s why my mother bought the grave inside in town. My father died in March and when she went in in April to pay she bought the adjoining grave making it a double grave. She had intended to go in as well there when she passed but she didn’t die until 1993 and her brother was buried in Parteen so she decided to be buried there,” explained Geraldine, who invited a gentleman who carves headstones to have a look at her father’s grave.

“As soon as he saw it he said it is quite obvious to anybody that it is a double grave because the headstone goes up in the middle of a grave.

“I am so upset with the whole thing. It is not very respectful to the dead,” said Geraldine, who would like other people to come forward if their loved ones have been put in similar situations in Mount St Lawrence.