Limerick communities urged to get behind Walk of Life 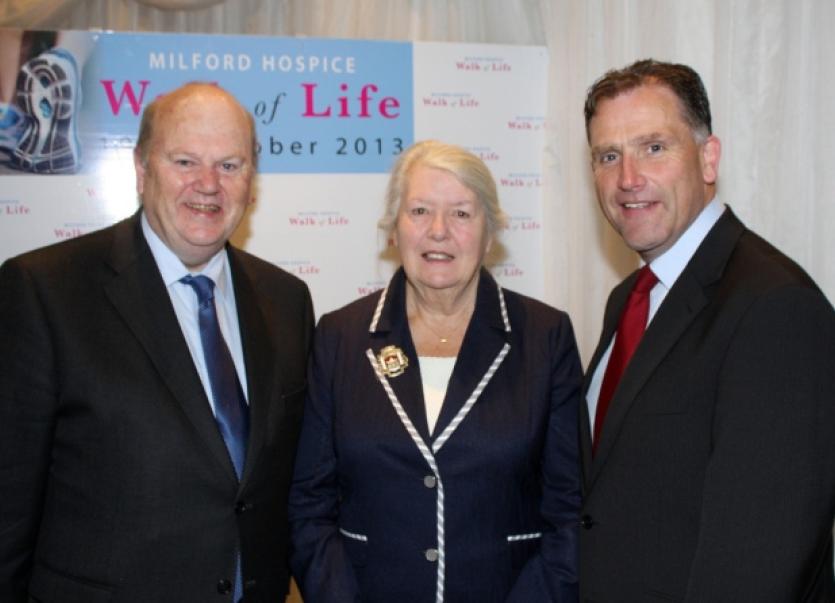 COMMUNITIES from across the county are being encouraged to take part in a major fundraiser for Milford Hospice.

COMMUNITIES from across the county are being encouraged to take part in a major fundraiser for Milford Hospice.

The first Walk of Life event will see five-kilometre walks take place in six locations across Limerick and Clare on Saturday, October 19 next.

The brainchild of Limerick Leader columnist Martin Kiely, participants will be sponsored to take the walks, in the hope that tens of thousands of euro will be raised for Milford Hospice.

A month out from the main event, the Walk of Life received an early boost after more than 200 local business people donated a total of €14,000 at a charity business breakfast in the Strand Hotel.

On October 19, six walks will take place at the University of Limerick, Glenstal Abbey, Ballyhoura, Newcastle West, Curraghchase and Sixmilebridge.

The aim is to get sponsorship, with all the proceeds going to Milford Hospice, which provides care for terminally ill people.

Finance Minister Michael Noonan joined Mayor Kathleen Leddin and Dr Bernard Gloster of the HSE at this Monday’s event, where people were asked to give money by buying a table, and making donations to the charity.

Mr Kiely said the main aim of the business breakfast was to keep the Walk of Life fresh in people’s minds, a month out.

“There was an opportunity to send the message of the Walk of Life to different businesses in the city, and sporting groups in the city and county. It spread a message: walk in solidarity for Milford Hospice,” he said.

The major event will see parishes across the county organise groups and teams to take part in one of the six routes.

Primary and secondary schools across Limerick will also support the event by holding a Colours Day the day before the walk itself.

Rather than training hurling teams this year, Mr Kiely has instead been putting all his energy into the Walk of Life.

“When you look at Milford Hospice, and when you hear of people going, it is the place people know about - but one that nobody wants to go to.” he said.

Mr Kiely added that Limerick is “very fortunate” to have a facility like Milford Hospice.

“I have met a lot of people that have been incredibly taken by the way their loved ones are treated in their final days there,” he confirmed. As well as the fundraiser in the city, the parish of Athlacca/Banogue raised €4,000 from a Walk of Life fundraiser over the weekend.