Charity receives over €31,000 in memory of Darragh 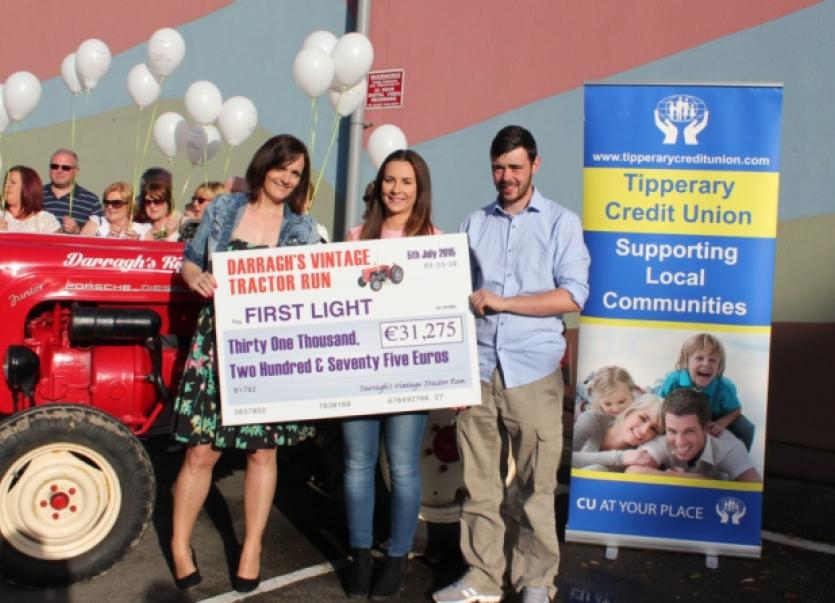 PATRICE Clarke and Donnacha O’Brien never wanted to start their journey to raise funds for First Light - a charity that supports families after the sudden loss of a child.

PATRICE Clarke and Donnacha O’Brien never wanted to start their journey to raise funds for First Light - a charity that supports families after the sudden loss of a child.

They did it in memory of their beautiful two-year-old son Darragh, who passed away suddenly last November. They organised a table quiz, family fun day and Darragh’s Tractor Run in Doon, where Patrice is from.

All the money has been totted up and it comes to the incredible amount of €31,275.

On Sunday evening they handed over the cheque to Louise O’Sullivan, of First Light, and held a remembrance balloon release. There wasn’t a cloud in the sky as 100 balloons went floating away on the breeze. Locals were invited to write their personal messages inside for loved ones.

Donnacha and Patrice wrote for Darragh, “Love you forever and always”.

A bigger crowd than expected attended the poignant ceremony beside the community centre.

“I was amazed at how many came out. I thought it was only going to be close family and friends but there was a good few from the community.

“We had a hundred balloons and we could have done with more. Everybody wrote out their own messages,” said Patrice.

After Darragh’s Tractor Run finished in April they hoped to break the €20,000 mark.

“Sponsorship cards just kept on coming in. It was mad. The donations on-line came to €6,800. There was no huge donation. The biggest was €500. It makes it more special as it’s all from donations made up of so many,” said Patrice.

As Donnacha is from Hollyford it came from both sides of the county border.

They found solace through First Light and are pleased at the news that all the monies will be spent by the charity to enhance their services in Munster.

“It is a charity that hopefully no one has to use but unfortunately we are in the position that we are glad that they are there and that we can use. You would rather you never heard of them but we would like to highlight that they are there,” said Donnacha.

Louise O’Sullivan, of First Light, travelled to Doon to thank them and their communities who backed them to the hilt.

She said it is the largest ever individual family fundraiser in Munster.

“It was about the memory of Darragh and there was a lovely crowd. I said a couple of words because I felt it was important they knew exactly how much change that amount of money can affect for us as a charity. We are looking at opening regional centres in Munster and employing regional bereavement co-ordinators so that people can get to families and communities faster rather than being Dublin centric. All the money is staying local - that is key,” said Louise, who had been told to expect an amount of around €20,000.

“When they turned the cheque around and I saw the amount of €31,275 it was one of those moments that takes your breath away or makes your knees feel wobbly,” said Louise.

“We rebranded last October. A lot of people weren’t contacting us as they thought we dealt with cot deaths but in effect we deal with children that have died - a farm accident, drowning. It doesn’t matter what age your child is, a child is under 18. Over the next six months we want everyone in Ireland to know about us.

“We don’t want anyone to have to pick up the phone to ourselves but unless people know that we are here...” said Louise.

They are also developing a care of next infant programme.

“When a couple lose a child suddenly and are considering having more children they are very worried, very frightened of opening that door again,” she said.