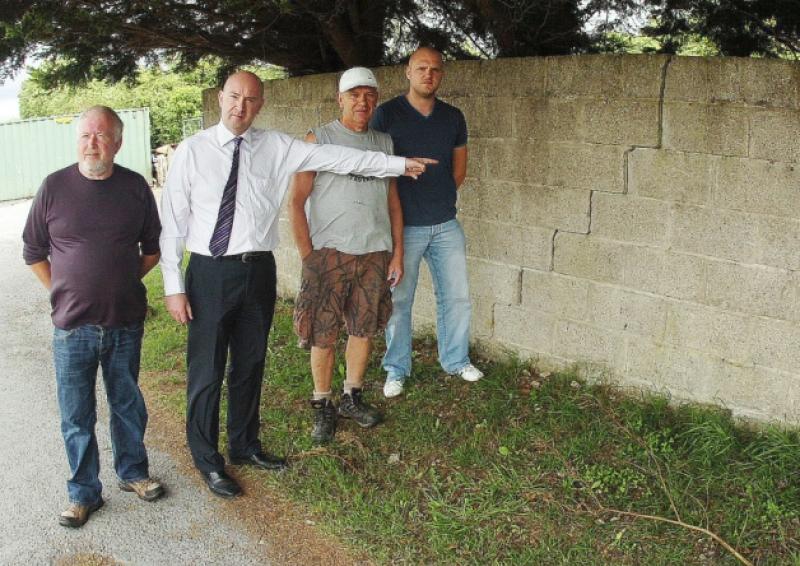 “IMMEDIATE action” is being taken to stabilise a cracked and dangerous wall in Dromcollogher, responsibility for which had caused a debate between Limerick County Council and the former County Limerick VEC

“IMMEDIATE action” is being taken to stabilise a cracked and dangerous wall in Dromcollogher, responsibility for which had caused a debate between Limerick County Council and the former County Limerick VEC

Over the past few months concerns have been raised about the condition of a six-foot wall at Buckley Terrace in Dromcollogher, which has developed a sizable crack from top to bottom.

The wall itself is on the site of the Dromcollogher Organic College, which is the property of the Limerick and Clare Education and Training Board, formerly known as the VEC. However, the wall was originally built by Limerick County Council, with the VEC’s consent. The crack, which has seen blocks become completely separated from mortar, has been caused by the roots of a nearby tree which is also VEC property, and on VEC land.

Cllr Michael Collins, who has raised the condition of the wall with both the council and the VEC, said that the issue has been rumbling on for months as neither the council nor the VEC could agree on who was responsible for the problem.

“I was speaking to the council last year, and they were insisting there’s nothing wrong with it. Now we’re being told that it needs to be propped.

“There’s an avenue leading up to the back of the terrace, and kids go up there and lean up against that wall. The locals are worried that if the wall falls, something very serious could happen.”

The issue of the wall was raised at a local area meeting of Limerick County Council in Newcastle West this Wednesday morning. Cllr Collins said that following a further deterioration in the wall’s condition, the council has decided to install a brace to prevent it from collapsing.

A spokesperson for the Limerick and Clare Education and Training Board said that following further discussions between them and the county council, “immediate action” is now being taken to repair the wall.

It is understood that the former VEC has resolved to remove the trees whose roots are damaging the wall, while the council has agreed to carry out the repair works themselves. Limerick County Council could not be contacted for comment by the time of going to press.

The education board spokesperson added that the work will be a “permanent solution” that will address residents’ concerns in the long term.

Cllr Collins said that removing the wall completely could be the only viable future solution. “It’s gotten to the stage now where the wall has to be replaced. If there’s an issue with cost, you could just put up a fence and plant some hedge instead. But something has to be done”.