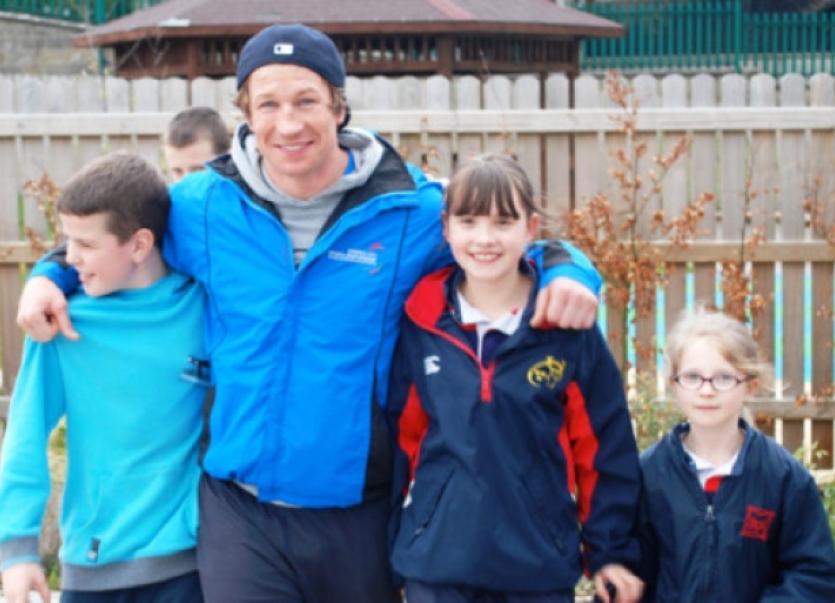 FORMER Munster and Ireland star Jerry Flannery was happy to give rugby advice and tips to a group of children when he visited the West End Youth Centre in Ballinacurra Weston.

FORMER Munster and Ireland star Jerry Flannery was happy to give rugby advice and tips to a group of children when he visited the West End Youth Centre in Ballinacurra Weston.

Members of the youth club were thrilled to meet one of their sporting heroes in the flesh and wasted no time to ask him about his time in the red and green jerseys.

However after answering their questions, the sports equipment was dusted off and everyone was being put through their paces.

The former hooker gave advice and tips to the young competitors who were eager to show off their skills.

“I loved meeting Jerry Flannery, I watched him loads of times on the telly and he was my favourite player before he retired. I beat him twice in the hurdle hops, he blamed his calf injury but I just think I’m better,” said Jack Molloy.

Jerry spoke with the young people about the importance of staying active and getting involved in youth clubs such as the West End Youth Centre.

He also encouraged the young people of Ballinacurra Weston to take advantage of the long summer evenings and get out and about with their friends.

Hayley Condron said she was thrilled to have met Jerry.

“I made all the girls in school jealous when I told them that I met Jerry Flannery and got his autograph. He was really good fun and spent ages helping me and my little sister get better at the long jump,” she said.

During his visit, Ross Ambrose briefed Jerry about the busy summer programme that will be running at the Youth Centre.

The activities will run for seven weeks and are open to young people aged between 7 and 21 who are living in the Ballinacurra Weston Area.

The activities include a range of activities from surfing and soccer to art and beauty.

As part of the summer camps provision the young people involved are also offered a range of day trips and overnight visits.

“The summer is really good fun in the Youth Centre, we play loads of different games and we go away on long trips on the bus, I get to try loads of new things that I haven’t done before,” said Ross.

The West End Youth Centre is open every Monday, Wednesday, Thursday and Friday evening and on Saturday afternoons.