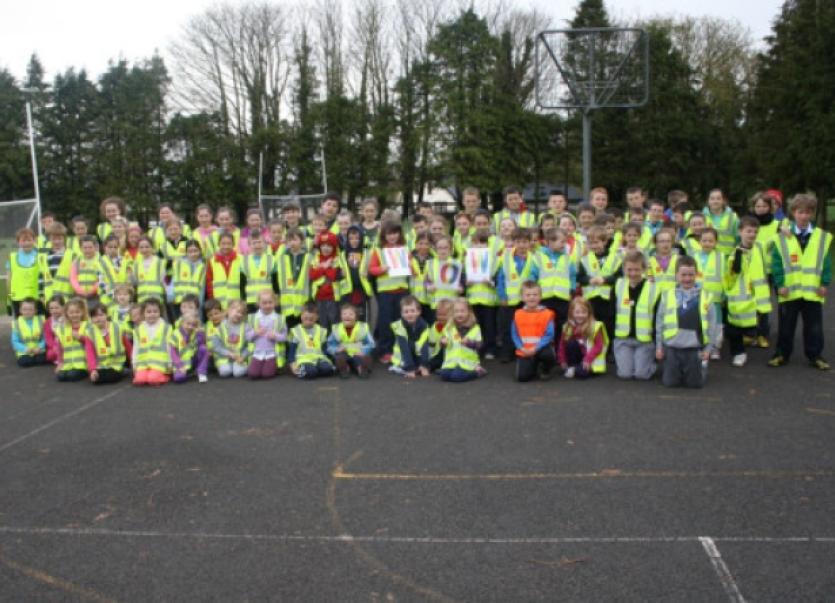 IF HERBERTSTOWN National School aren’t awarded an active flag there will be a stewards enquiry.

IF HERBERTSTOWN National School aren’t awarded an active flag there will be a stewards enquiry.

Even maths was taught outside during their active week. It began with a 7km cycle for the older classes on Monday and ended with swimming on Friday.

It was a hectic week but thoroughly enjoyed by all, said principal Carmel Long.

“The feedback from parents has been so positive. They said that their children stayed outside in the evenings and played for longer. Of course the children loved it as it was a break from the books and the teachers made an effort to teach subjects in an active way.

They were feeling the effects as the week wore on and had aches in muscles they didn’t know they had!” joked Ms Long.

The nine staff - four mainstream teachers, one resource, one learning support, two SNAs and secretary - and 88 boys and girls all embraced the week.

Former principal, Betty Carmody, was a popular returnee as a skills coach from Hospital Tennis Club.

But it wasn’t just about the body as the mind was also exercised.

Limerick Sports Partnership gave a presentation on health and nutrition and the whole school participated in healthy baking classes.

“The children were having discussions about healthy food choices following the talk. The parents said they were delighted to see so much activity going on in the school and to be invited along to many of the events. We received great support from parents in different ways including providing a drinks table during the skipathon in aid of the Irish Heart Foundation,” said Ms Long.

While they will surely gain their active flag, Ms Long believes the memory of the week will last for years.

“The children are eager to maintain some of the initiatives introduced like running ten laps of the basketball court every morning and our weekly WOW (Walk on Wednesday).

Some children have also requested space in the shed to store their bikes during the day so that they can cycle to school on fine days. This alone proves how active week has reached these children,” said Ms Long, who wished to thank the children, parents, teachers and Limerick Sports Partnership for their enthusiasm.