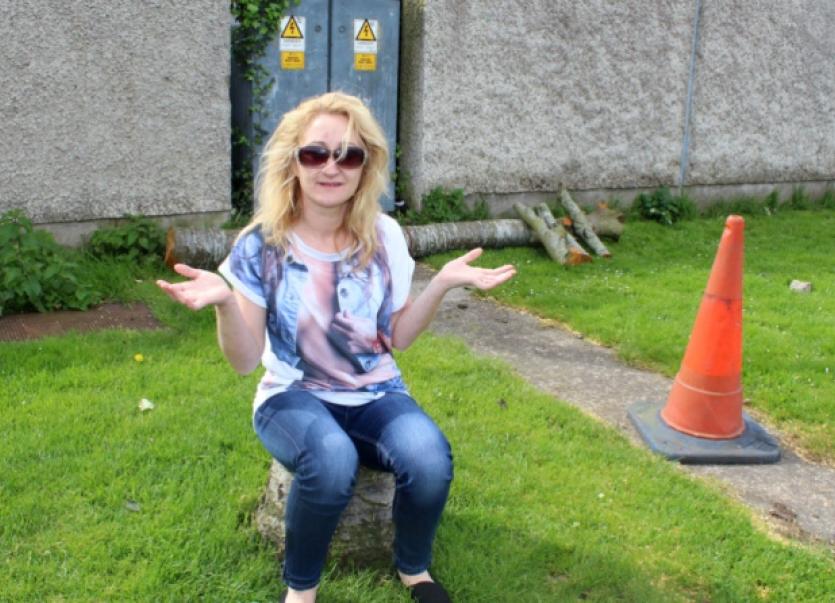 RESIDENTS in Limerick city’s Lee Estate are angry with the local authority for removing “a perfectly healthy tree for no good reason”.

RESIDENTS in Limerick city’s Lee Estate are angry with the local authority for removing “a perfectly healthy tree for no good reason”.

Marion McGuane who lives opposite where the tree stood for 33 years has collected almost 80 signatures and contact details from the Lee Estate area to petition for a tree to be planted in place of the one that was removed.

The campaign has received wider support in the form of a Facebook page that was set up after the tree was taken down and within 48 hours almost 850 Limerick people had registered as supporters of the campaign.

An irate Marion said: “It is an absolute disgrace they came at 6.45am knowing most people would be in bed and cut down this beautiful tree. Everyone down here is disgusted with what they have done. Why?”

Senior executive officer with Limerick City and County Council Christy O’Connor said: “We’re sorry that there’s so much distress over the tree being knocked in this case. We had a number of complaints in relation to football being played and the tree was being used as a goal post.”

Cllr John Gilligan, who lives in the estate said: “It was a complete shock to me that the tree was taken down, but I will be asking the Regeneration board to erect goalposts in the fenced off green area near the playground so that the kids can play ball.”

The estate was named after Monsignor PJ Lee who served as parish priest of St Mary’s from 1944 to 1980 and resident Kiara Cahill remembers Msgr Lee himself blessing the trees when they were first planted in the estate.

Resident Marie McGrath expressed her disgust at the whole affair on the Facebook site, which is called Save Our Trees, Let Our Kids Play.

“The people that are complaining about innocent kids playing soccer have forgotten that the parents of these kids helped them when their homes or family homes got flooded not so long ago. They seem to have forgot this very quickly.. Disgrace!!”