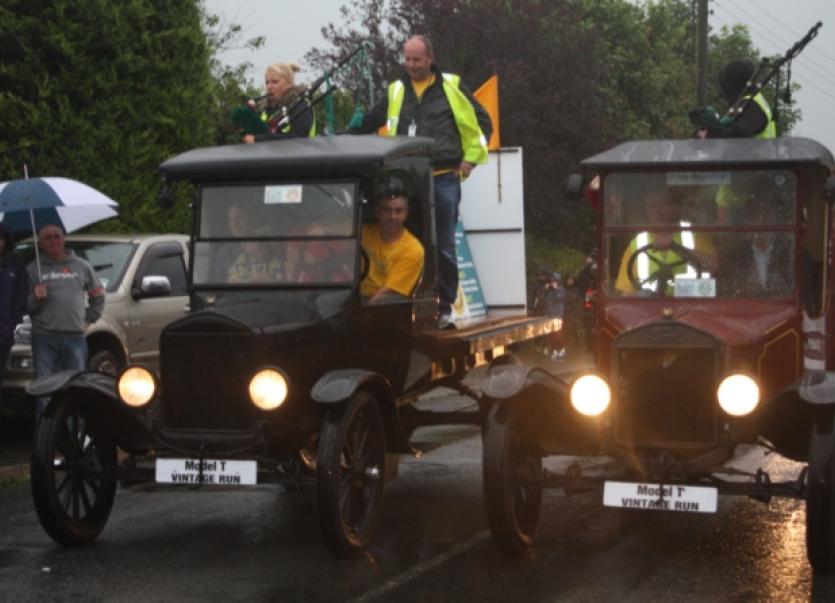 REPRESENTATIVES from 22 hospices will reap the rewards of a trojan effort by a County Limerick community who have raised €130,000 through their Drive to Survive campaign.

REPRESENTATIVES from 22 hospices will reap the rewards of a trojan effort by a County Limerick community who have raised €130,000 through their Drive to Survive campaign.

The initiative which was spearheaded by Dan Gallahue - the son of the late John Gallahue from Ballylanders who was cathaoirleach of Limerick County Council - saw a group of volunteers travel through 26 counties collecting money for the good cause along the way.

The volunteers who completed the journey between August 9 and 15 last were led by two 1920s Ford Model T cars and a car signed by the Limerick hurling team and management as they covered 1,013 miles.

“It gives us great pleasure to announce that our Model T drive around the 26 counties was a very successful venture raising in excess of €40,000 on the road. Our running total of funds raised to date is in excess of €130,000,” explained John Curtin, secretary of the Drive to Survive campaign.

The organising committee are now in a position to distribute this money to the various hospices within the 26 counties.

Representatives of 22 hospices across the 26 counties of Ireland will attend an event taking place at Gallahue’s Hall, Ballylanders on Friday, March 14 at 7pm.

Among those performing in the hall on the night will be the 2013 Voice of Ireland winner Keith Hanley, the Anglesboro Pipe Band, and Comhaltas Ceoltoiri Eireann.

There will be music afterwards in the bar with The Humbucker Freshmen.

“It is outstanding - mighty money. We are thrilled,” said Dan Gallahue of the amount raised by the campaign.

“We met a lot of cases along the way where money just wasn’t available and they still emptied their purse with whatever coppers they had. We did hear an awful lot of stories along the road and it would surpass your wildest dreams to bring that much money together,” Dan added.

As part of the wider Drive to Survive campaign, a number of events took place throughout Limerick including a barbecue, a raffle, a disco and a race night.

“Cancer is a difficult subject for many people, as we all know someone who has had cancer at some point. This is why we need to come together to gather the funds that will help provide the standard of care needed,” said Mr Gallahue at the launch of the drive in 2012.