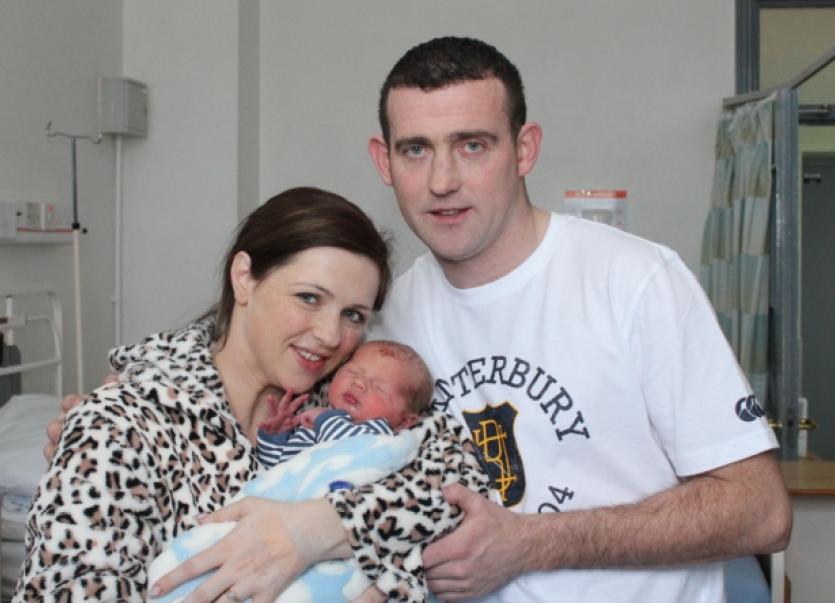 THE first baby of the new year to be delivered at University Maternity Hospital, Limerick was Kyle Kevin Maxwell who weighed in at 7lbs 4oz at 1.33am on New Year’s Day.

THE first baby of the new year to be delivered at University Maternity Hospital, Limerick was Kyle Kevin Maxwell who weighed in at 7lbs 4oz at 1.33am on New Year’s Day.

Kevin is the second child of Trevor Maxwell and his partner Catherine Desmond who have a one-year-old son Lee.

2014 was already going to be a special year for the couple, from Kilkisheen, County Clare, who are due to get married in September.

“We are absolutely over the moon, we are just delighted that he was born healthy and it is a major bonus that he is the first baby of the year,” said Trevor who revealed the couple’s New Year celebrations were thrown into disarray by their new arrival.

Baby Jacob Quinn, who was also born to parents from County Clare lost out on being the first baby of 2014 by just 11 minutes, after he was delivered at University Maternity Hospital, Limerick at 1.44am.

His parents, Ross and Karen Quinn from Ennis, who run the Vasco restaurant in Fanore, were delighted with the addition to the family, who weighed in at a healthy 8lbs 2oz.

“I couldn’t believe it when they told me what weight he was,” said Karen who added that baby Jacob had been due on December 30.

The couple have another son, Jonah, who is due to turn three next month.

“It’s brilliant, it’s exciting. We were expecting him to arrive all over Christmas but he held out until the New year, so it’s great,” said Ross who predicted his newborn son may end up playing hurling for Clare in the future given his size.

The first baby girl of the New Year to be born at University Maternity Hospital, Limerick was Eliza Kasinska.

She weighed in at just under 6lbs at 2.10am rounding off a busy start to the New Year for staff at the hospital.

Eliza’s parents, Krzysztof and Marta are originally from Poland but have been living in Nenagh for the past eight years.

Krzysztof revealed how there was a panic when his wife’s waters broke at 1.30am less than an hour before his daughter was born. “I drive very fast,” he joked adding that baby Eliza was not due until January 19.

The first baby of the new year to be born to Limerick parents was delivered at 2.16pm on New Year’s Day.

Lana Rae Buston, who weighed just over 7lbs when born, is the second child of Antoinette Hogan and her partner Darren Buston from Croom.

“We’re delighted and over the moon and it was a complete surprise to hear she was the first Limerick baby of the year, we had no idea until the nurses told us,” said Darren who said it’s an exciting time for the couple as their son, Cayden, turns two on January 2.

Because, Lana Rae wasn’t due for another fortnight, Darren and Antoinette were able to ring in the New Year at one of their local pubs in Croom.

“We were out and people were slagging us that the baby might come early,” joked Darren who explained the couple decided to travel into the maternity hospital at around 10am on New Year’s day.

“It’s fantastic, she was born just after 2 and everything went perfectly and we are absolutely delighted,” he said.