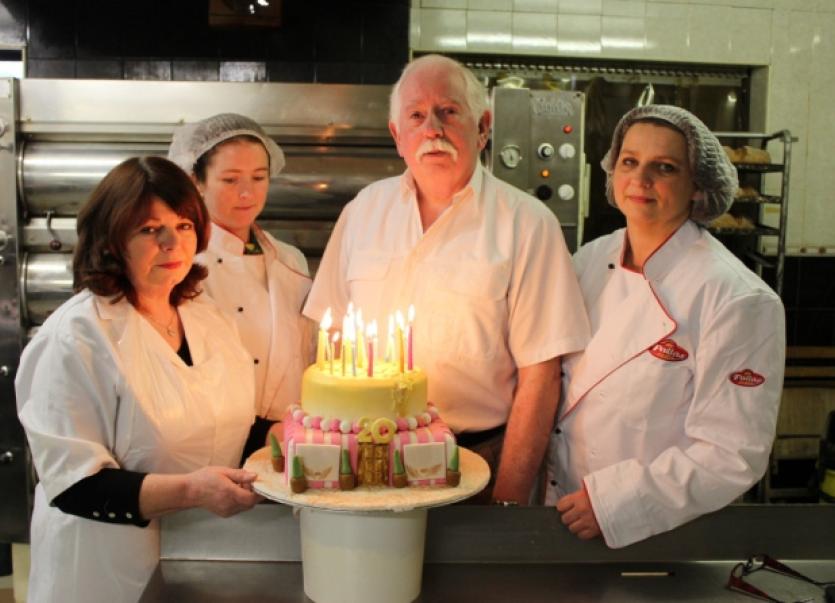 IT ALL began with an ad in the Limerick Leader 20 years ago.

IT ALL began with an ad in the Limerick Leader 20 years ago.

Two decades on, Fitzpatrick’s Bakery are celebrating their 20th anniversary – also in the Leader.

Based in Ballinagarde, Ballyneety, Phyl Fitzpatrick said her husband Michael and their accountant saw an ad in this newspaper for a bread round all those years ago.

“They went off the two of them and before I even saw it they had it bought,” smiles Mrs Fitzpatrick.

They purchased a bakery, the existing customer base and they had a wholesaler, who they still deliver to, to this day.

“We make what we call the ‘trip to Tipp’ six evenings a week. We were renting space over at the Abington Enterprise Centre at the time. We moved in there for around six months and then we moved the whole business over here [Ballyneety].

“We already had a premises here from a former business and we got it customised for the bakery. After we took over it really mushroomed in those days, it really grew very quickly - it went from very, very small beginnings to very big. At one point we had 10 or 11 staff,” said Mrs Fitzpatrick.

But like practically every business in the country staff numbers have cut back with the recession.

“We are still there 20 years later which is good going,” she adds.

Currently five are employed and it is a real family affair as Mike and Phyl and their son David continue to drive the business forward. Daughter, Jean Glasheen, also lends a hand and her artistic talents as a headpiece and fascinator designer are certainly put to good use.

One of the advantages of running a bakery is you can bake your own celebratory cake and Jean is responsible for the one in the photo.

“She does birthday, wedding, occasion cakes. It is limited only by your imagination, Jean can literally put anything in icing,” said Phyl.

And while Fitzpatrick’s can make anything to order it is the humble but delicious apple tart that is their mainstay. They are even sent to the Aran Islands.

“We have broadened our product base but we still have the old reliables that we started off with - tarts, soda breads and scones.

“We sell all over through our distribution - you can buy our products in shops in Ennis, Tipperary and of course our van does the city and East and West Limerick,” said Mrs Fitzpatrick.

It is quite an achievement for the lady who had never seen a commercial oven before starting Fitzpatrick’s.

And while baking was a hobby of hers and she has received training, she had never seen “anything like the equipment” in their new company.

“It was all new to me but we had to make it work. We had no choice. That said it worked out fine.”

And now it is second nature.

As well as providing direct employment they also support other jobs in the county.

“Absolutely, that’s the whole idea and people are becoming more and more aware of supporting local. This is the way we have to go and keep the money local, we buy our raw materials locally,” said Phyl, who wished to thank everyone who has supported them over the years.

“It all started in the Leader and here we are 20 years later.”