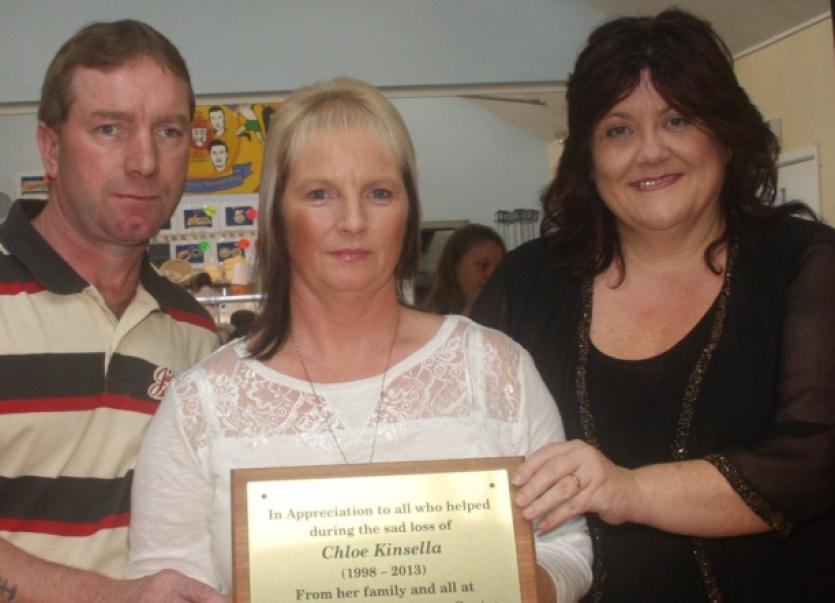 THE mother of tragic Kileely teenager Chloe Kinsella said that if her late daughter’s friends saw the “devastation” she was going through, they would never drink again.

THE mother of tragic Kileely teenager Chloe Kinsella said that if her late daughter’s friends saw the “devastation” she was going through, they would never drink again.

Speaking publicly for the first time since her 15-year-old daughter’s body was recovered from the River Shannon, Shirley Kinsella urged youngsters to “live life to the full” and not to drink.

Family and friends of the former St Nessan’s student gathered at St Munchin’s Community Centre yesterday for the unveiling of a plaque recognising the efforts of the emergency services involved in the wide-ranging search.

Representatives of Search and Rescue teams in Limerick, Mallow and Bunratty joined the gardai, the Civil Defence, the Coastguard, and the Fire and Rescue service to pick up medals from staff at the community centre, which acted as a hub for the six-day search operation.

Hundreds of volunteers from across the city also joined the search operation over nearly a week.

Wearing a necklace bearing a picture of the pretty teenager, Shirley said she never expected the community to mobilise in such a way.

“People were absolutely excellent, everyone went out there looking for her, and I can never repay them for what they have done. I never expected it,” she said.

Shirley admitted she held out hope for her daughter’s safe return right up until she was found dead, saying: “I really thought she would come home- that someone had her, and someone would look after her. I never thought she would be found where she was.”

She also urged other youngsters to lay off the drink.

Referring to Chloe’s peer group, she said: “Live life to the full: they don’t need drink at the end of the day. They are all beautiful children, and they were all her friends. They think drink helps, but it doesn’t. There is plenty out there for them: all they need to do is go and look for it.”

She added: “If any of her friends had a look at the devastation I am going through, they wouldn’t even dream of touching a drink. I am absolutely devastated, and I cannot get my head around it. I haven’t had a proper night of sleep yet. I know she is gone, but I still keep thinking she might come back.”