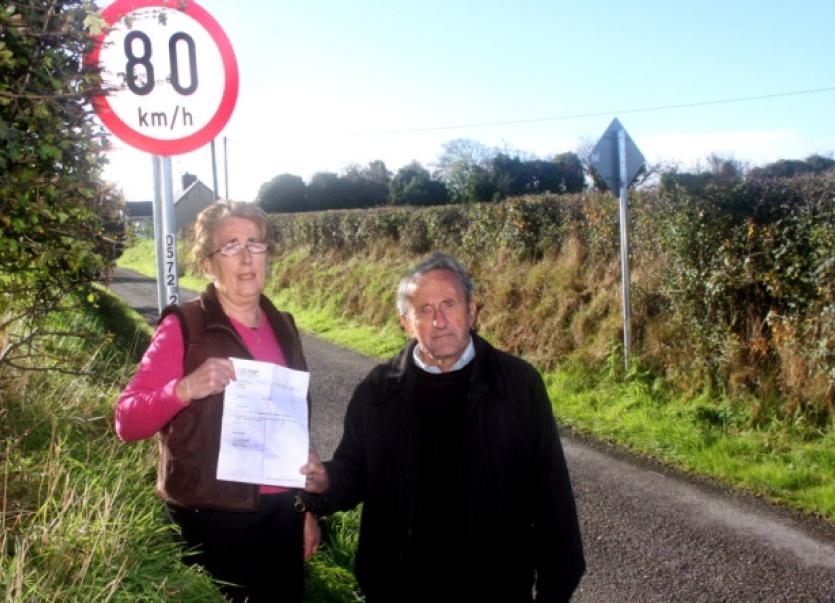 A GRANDMOTHER living on a rural road near Abbeyfealehas said that she is being driven crazy by an 80 kmph speed limit sign which has strangely appeared at the bottom of her road, creating confusion and concern.

A GRANDMOTHER living on a rural road near Abbeyfealehas said that she is being driven crazy by an 80 kmph speed limit sign which has strangely appeared at the bottom of her road, creating confusion and concern.

Kate Curtin said that she has written to both Limerick County Council and the National Roads Authority (NRA) to try and get to the bottom of why the sign has been erected at the foot of her road at Dromtrasna Collins, just outside Abbeyfeale.

While the road in question, the L21005, does have an 80kmph limit like all local roads, it has a narrow, muddy and uneven surface which is difficult to negotiate at anything above a crawl.

Ms Curtin said some motorists have started confusing her passage for the main road up to Dromtrasna, and have almost damaged their cars driving at speeds of close to 80 kmph up the hill.

“Some fella with a Dublin reg car came flying up here six months ago. I had to flag him down. I was talking to him and he said ‘you’d want to get on to your local council about it’. But it’s all being passed from one to another.”

Ms Curtin said that after the sign was put up in May she contacted Limerick County Council. “They told me it was the NRA’s problem. I wrote to the NRA and they said they’d be down to look at it, but it’s still there.”

After Ms Curtin and her neighbours shared their concerns about drivers being encouraged to drive at up to 80 kmph “into a dirt track”, they decided to turn the sign around so drivers turning off the main Abbeyfeale to Limerick road would not see it.

“My neighbour said he’d take it down. But if we did that, the council would come out looking for it one day and it wouldn’t be there. We’ve no problem taking it down, but we can’t. My husband went out and turned it around”, Ms Curtin said.

Ms Curtin received a written reply from the NRA on August 6, in which an official with their programme division said that the matter would be referred to its maintenance managers “who will investigate and take appropriate action”.

A spokesperson for the NRA told the Limerick Leader that the only roads it has direct operational control over are motorways, and all other issues, including signage, fall under the remit of local councils.

Limerick County Council’s roads department had not responded to requests for comment by the time of going to print.