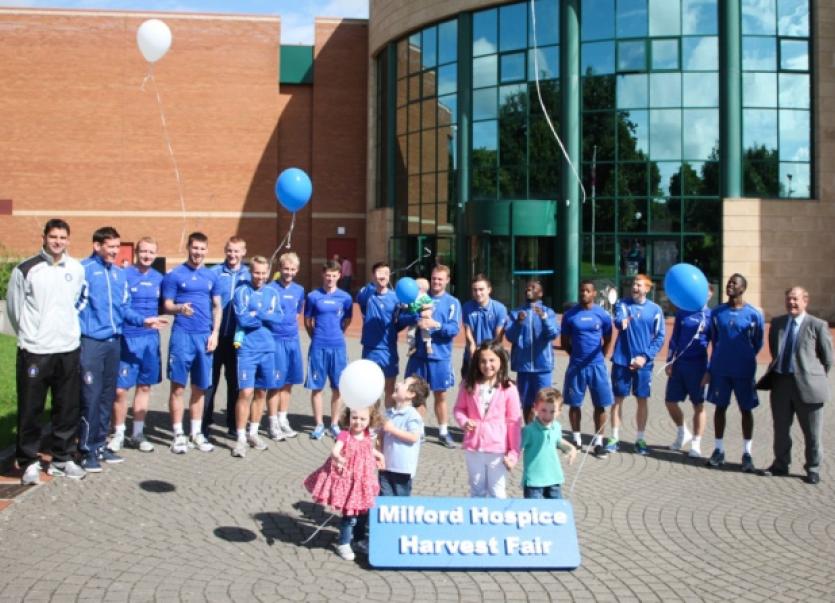 THE Limerick FC squad turned up in their ‘superblue’ gear to help launch this year’s Milford Hospice Harvest Fair at the University of Limerick, last week.

THE Limerick FC squad turned up in their ‘superblue’ gear to help launch this year’s Milford Hospice Harvest Fair at the University of Limerick, last week.

In 28 years of the annual fundraising fair taking place, it will be the first year the event will run in the UL Sports Arena, with the family event to run on September 1.

Limerick FC manager Stuart Taylor said the team was “more than happy” to support Milford Hospice, praising it as the most developed of its kind in the country.

“It seems to be the most developed hospice in the country. It has that accolade. We are looking to learn from them. To be a part of what they are doing is huge for us. If we can help them in any way, whatsoever, we will be there for them.”

UL director of sports and recreation, Dave Mahedy, said it was a “great idea” that Milford had decided to merge with the University for the event. He added that he hopes for it to continue for years to come, if it proves to be successful this year.

“It is great and it is something new, as Milford is on our doorstep. It is great, as well, because we will get to work together. We are ideally suited for this event because we have huge outdoor and indoor area.

“We got approached in early summer and they were just looking for a new venue. It is going to take precedence for years to come. Remember we had the Dalai Lama last year, and the Arena really suited it. The indoor hall we have is as big as the Point (in Dublin), and it is nearly as big as a football field,” he said.

According to officials, there will be up to 300 volunteers and helpers at the event, which is both outdoors and indoors, running from 11am to 4pm.

Milford Care Centre chairperson Joe Murphy said it was a “proud moment” for the hospice to finally get the opportunity to work alongside the University.

“This year, the venue being at the University, will be both exciting and challenging. Milford Hospice relies on private funding and this year will be the test. This year it is going to take precedence for years to come.” he said.