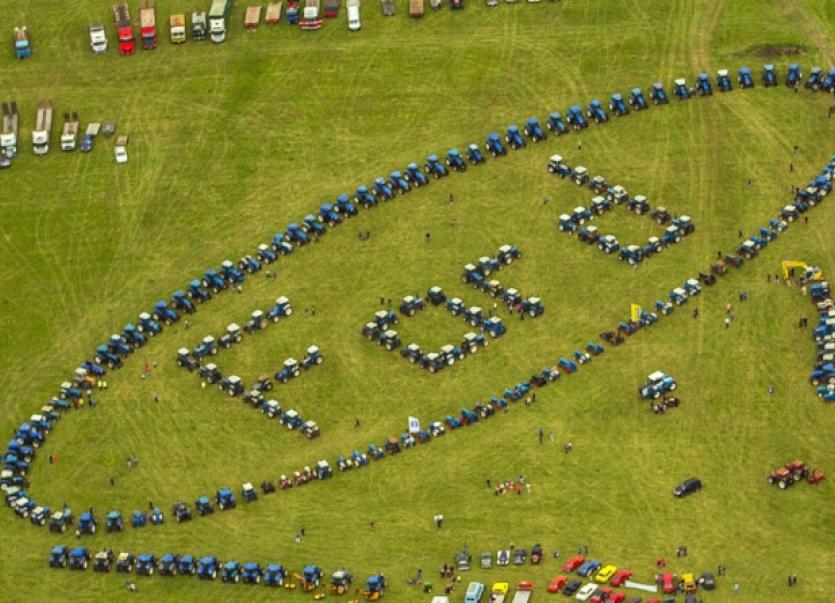 THIS STUNNING photograph, taken by John Flavin from the sky above Meanus, displays the military precision involved in forming the Ford emblem.

THIS STUNNING photograph, taken by John Flavin from the sky above Meanus, displays the military precision involved in forming the Ford emblem.

Months of work by Greybridge Classic Club members went in to organising Sunday’s charity day in Meanus, and ensuring they had the requisite number of tractors to form the Ford oval. The detail is incredible. A mathematician would be hard pressed to find fault with the geometry. One hundred and eighty tractors came from all over the county and country,

“We had a great representation of models coming from the four corners of Ireland. We had two lorry loads of counties join us from Armagh and Cork didn’t just have a heavy presence on the hurling field - we had the very impressive FW60, the Silver Jubilee, and the boys from Courtbrack joined us as part of their tractor run. They brought a great variety of well turned out tractors.

“People came from Sligo, Waterford, Wexford and of course our own local clubs were really a fantastic support to us on the day,” say organisers.

And though the oval was the centre of attention it wasn’t the only show in town. Twelve harvesters of various sizes and from different decades competed against each other in silage cutting. There was great variety of vintage cars and lorries, along with the Ford Escort club and die-cast displays. The RSA and emergency services highlighted safety. And for those with no interest in anything engine related there were plenty other attractions and fun and games for children.

Greybridge Classic Club say they have been overwhelmed by all the support and wished to thank all who exhibited vehicles, sponsored prizes for competitions and raffles, local clubs and community representatives who assisted on the day to enable the event to run as smoothly as possible, and, of course, to all the visitors who joined us on the day.

“For an event which is run on a completely voluntary basis, we really have been amazed by people’s generosity in supporting our very worthy causes of Cliona’s Foundation, Motor Neuron Research, Childrens Ark unit and Crumlin Children’s Hospital.”

After forming the Massey Ferguson emblem last year and now Ford’s, what will they have planned for 2014?