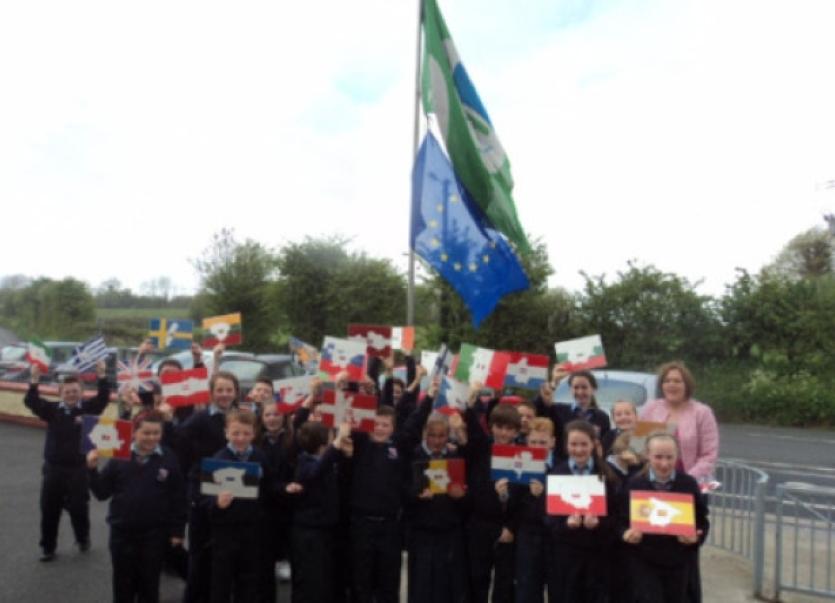 NOT SO long ago pupils in County Limerick schools were practically 100 per cent Irish.

NOT SO long ago pupils in County Limerick schools were practically 100 per cent Irish.

That has changed dramatically in recent times and Caherconlish National School is a shining example.

The Limerick boys and girls don’t even have to be taught about different cultures, they can learn from their friends at play time.

Principal, Saundra Ni Chíosóig, says about 10 per cent of their 103 pupils are international.

“It is amazing that the children don’t see difference which is lovely. It brings great diversity and great scope to look at other countries and cultures,” said Ms Ni Chíosóig.

They applied for the Blue Star Programme - an Irish primary school project which aims to foster better understanding and knowledge of the European Union.

Caherconlish National School were always going to qualify as they practice that everyday.

The local school with a global outlook also has children from further afield.

“We have two children who would be Chinese. We have one child originally from Argentina and we have a child born in Chicago,” said Ms Ni Chíosóig.

They complement four or five children whose families are from Poland.

“We had one girl with us in sixth class and if you came into the class you would never think she was anything but from Caherconlish until you heard her surname.

“It is hugely important how children relate to each other and it is so positive,” said Ms Ni Chíosóig.

All schools that successfully complete the Blue Star Programme are awarded an EU Flag and a Blue Star certificate signed by the Minister for European Affairs.

The Caherconlish school passed with flying colours with fourth to sixth class pupils taking part. “Each child had to study a European country and give a presentation. They studied the history of the European Union, its foundation and structures, World War I and II, our MEPs and more,” she said.

Pupils took part in the country-wide Shake Hands for Europe initiative and wish each other a Happy Europe Day. The whole school, members of the community, teachers and board of management joined together in the hall.

A European buffet was put on featuring French bread and pâté but the most popular choice was definitely the Belgian chocolates!