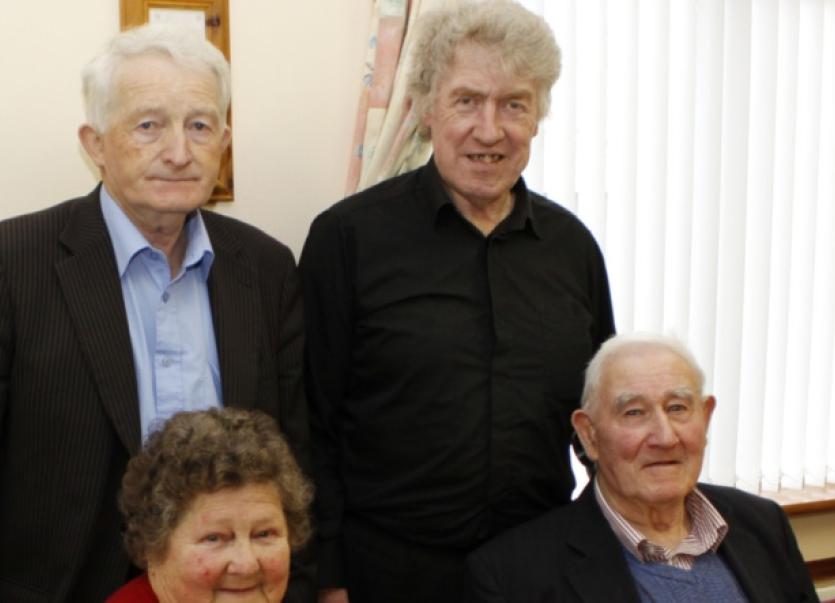 JOHN MULCAHY shakes a hand like a man half his 90 years of age.

JOHN MULCAHY shakes a hand like a man half his 90 years of age.

His grip is as strong as it was on a hurley when he played with Limerick in the 1940s. He is as fit a man of 90 that you could ever meet and his memory is as sharp as a tack.

John was thrown a surprise 90th birthday party last week in Cappamore Day Care Centre where he has been coming since it opened in 1998.

The Mulcahys are old Cappmore stock. His father, also John, won an All-Ireland with Limerick in 1897. His son was only 18 when he got the call-up in the forties.

“I hurled around seven years with Limerick. I played when I was very young because there was no minor or u21 team during the Second World War. They had no transport so they did away with them,” said John, who played at centre-back with Cappamore and in the forwards for Limerick.

“I made it to several Munster finals but we won only won junior. We won the National League in 1947, we beat Kilkenny. I played with the Mackeys. In one senior game Mick ran with the ball on his hurley as the back man came out. Mick tipped it high in the air as if he was giving it to him, he went up for it, caught it and then hit him in the chest,” said John, who clapped his hands to demonstrate the impact of Mick Mackey’s shoulder.

“He turned him like a screwdriver. He did it four times and stroked the ball over the bar. The referee ran down to Mick and said ‘off’. I said to the referee, ‘What is he being put off for?’ He said, ‘There would only be one team on the field,” smiled John. As Cappamore was a junior club he was picked by Ahane and won county medals with them, as well as with Cappamore.

He grew up on Moore Street in a two storey house built by his father.

“There was a row of small houses - 82 at one side of the road, that will tell you how small they were. They were terribly poor people but terribly honest. We had a shop and sold a lot of vegetables from a market garden at the end of the house. The poor people would come in, they would ask for a stone of potatoes and they mightn’t have the money for you but when they would have it they would pay and if they hadn’t it you would see them out in the garden tilling it. They would give you a few days to pay you back - they were terribly honest.”

John worked as a builder and his wife Breda looked after the sows and the cows. They raised nine children. He smoked one pack of cigarettes in his life and that was it.

“We sold cigarettes in the shop and one day I stole some. I smoked them all, one after another and I nearly died. Never again,” said John, who visits Cappamore Day Care Centre four days a week and encourages more men to come along. “It is fantastic place. We even do exercises. We have our hands going everywhere - we could be boxers! You get a great dinner, have a chat, maybe a few waltzes, a sing-song and a bit of music.

“The staff are lovely and we’re very lucky to have it in Cappamore.”