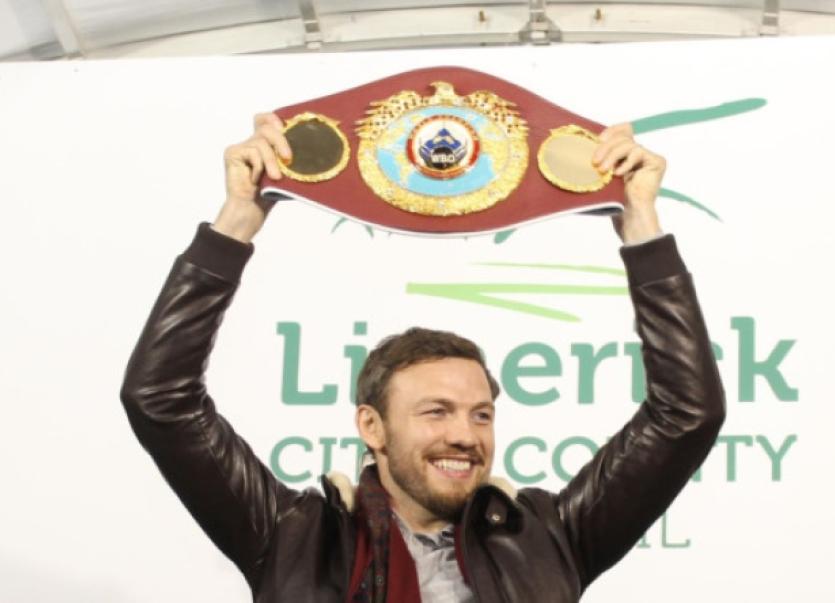 WORLD middleweight champion Andy Lee wants the children from his home parish to march with him on his homecoming parade in Castleconnell.

WORLD middleweight champion Andy Lee wants the children from his home parish to march with him on his homecoming parade in Castleconnell.

Boys and girls are asked to gather at the ACM Community Centre from 5.30pm this evening. The parade will commence at 6pm, go around the front of the church and up the hill to the parish hall. Turf fires will be lighting!

One of the 10-strong organising committee, shopkeeper George Lee, said: “He has always had a fondness for Castleconnell and he has always said it was his home, so it is nice that locals will turn up and give him a good welcome home. He has always been very good to the children of the parish and wants them to march with him.”

A special presen-tation will be made to Andy in the hall and afterwards he will meet and greet old friends and pose for photographs.

One man who is certain to be there is Mark Connolly, who is behind the six-metre banner hanging proudly on church railings congratulating Andy from everybody in Castleconnell. Mark has been following Andy’s progress for years.

“Funnily enough I had a friend at the 2002 World Junior Championships in Cuba where he won a silver medal. My friend was texting me back about this Limerick guy who was cutting up all before him and I’ve been keeping an eye on him ever since,” said Mark.

With the help of local designer Dave Ewing, photos from the Limerick Leader and Signs Plus, the banner was made in no time.

“Hopefully Andy will knock a few defences out of it and we can leave it up. There is talk after the defence he may end up in a unification bout, all going well, to be undisputed middleweight champion of the world. If that happened I think we would have to build a statue – a banner would not do it!” said Mark, who has never met Andy.

“I have read a lot of interviews with him and he always comes across as a very humble guy and an absolute gentleman - a credit to his family. From talking to the long-time locals who would have known him when he lived here everybody speaks very highly of him,” said Mark, who hopes to get a picture of Andy, his three sons Eoin, Liam and Darragh with the banner.

“That would make my Christmas,” he smiles.

While there have been many bonfires lit and celebrations for triumphant Ahane and Limerick GAA men Andy isn’t the first local to bring home a world title from America.

Back in 1906 world fly-casting champion John Enright made a cast of 152ft with a 20 foot Castleconnell rod, which broke his previous world record in Central Park, New York.

George Lee is a direct descendant of Mr Enright.

“They picked him up at the railway station and carried him down shoulder high. It was a parade, much like we are trying to give Andy,” said George, who plans on bringing the world championship cup to the homecoming.