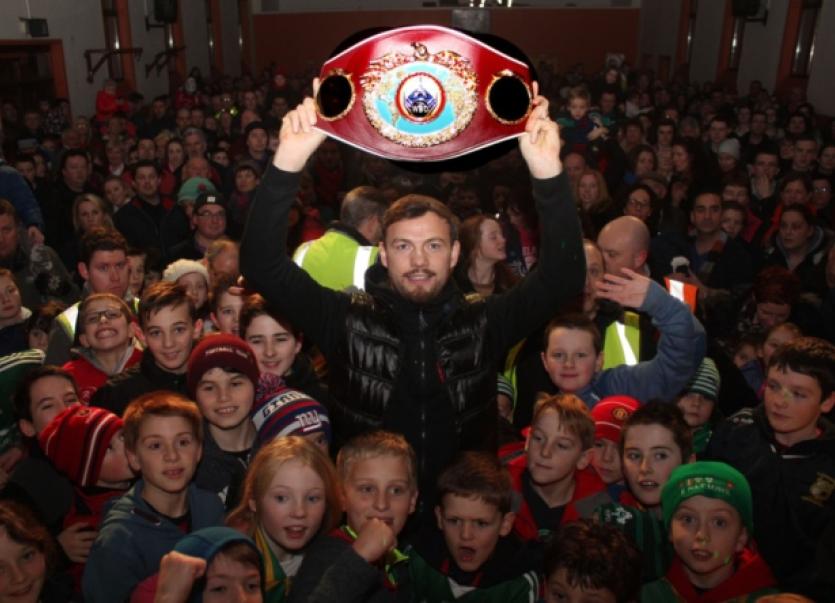 ANDY Lee said he was “humbled” by the turnout at his homecoming in Castleconnell.

ANDY Lee said he was “humbled” by the turnout at his homecoming in Castleconnell.

An estimated 1,500 men, women and children turned out earlier this evening to greet the new WBO middleweight champion of the world.

Children gathered from before 5.15pm to march with Andy at 6pm on his way to the parish hall.

The champ was driven in an open top vintage car flanked by four men carrying lit pitch forks of turf and a marching band. Hundred upon hundreds followed in his wake.

The atmosphere was electric as Andy entered the hall to the theme tune from Rocky. He bounded onto the stage like he was entering the ring as the chant went up “Andy, Andy, Andy”.

Following presentations to Andy, his mum Ann and wife Maud, Andy spoke into the mic but admitted “I don’t know what to say”,

“It is humbling to see the turn-out. Thank you all very much for turning out. It means the world to me,” said Andy.

Hundreds had to wait outside as the large hall can only accommodate 1,000, He spoke of his love for Castleconnell and how they picked him up when he came home after the disappointment of the 2004 Olympics. Andy was received like he had won the gold medal.

“I said back then if I ever won a world title I would bring it back to Castleconnell,” said Andy, who was almost drowned out by the cheers from the crowd.

He was good to his word on a night that will live long in the memory of Castleconnell.