Sadness in Limerick at funeral of tragic Sophie 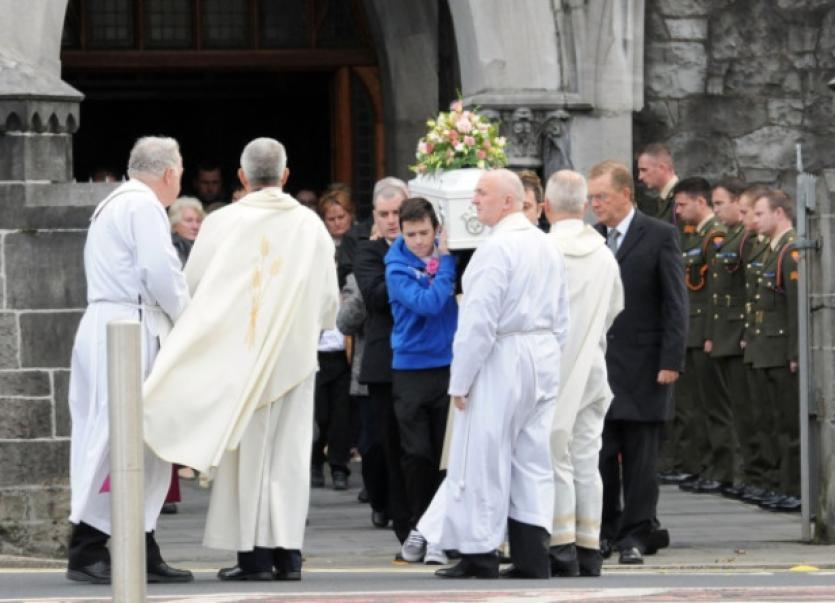 A MOVING insight into the life of a little girl, who, at birth was given just four days to live but had soldiered for eight years to experience a most extraordinary life, was given at her funeral Mass this Saturday.

A MOVING insight into the life of a little girl, who, at birth was given just four days to live but had soldiered for eight years to experience a most extraordinary life, was given at her funeral Mass this Saturday.

“No matter how much you prepare for it – you never really are prepared for the words that Sophie has passed away. It’s almost like the clocks have stopped and time has stood still,” noted Fr Seamus Madigan in his homily during the Mass of the Angels at 11am.

Sophie Mulcahy passed away in the Rainbow Ward at University Hospital Limerick at around 7am on Thursday.

The brave little girl who lived in Rhebogue, and whose father Liam is from Kilmallock, had the genetic condition 1q43 - one of only 40 known cases in the world.

Gifts brought to the altar of the cathedral by members of Liam’s army colleagues included Sophie’s Child of Courage award which she was presented with in 2012, her spinning toy “which brought her great pleasure”, her small cycling jersey representing the hundreds of people she bought together through the charity her dad Liam founded, Cycle 4 Sick Children, and, finally, a small framed photograph of Sophie with her big brother Dion and little sister Kayla.

To the front of the altar, beside Sophie’s small white coffin which was covered in delicate pink and white flowers, stood a collage of little handprints completed by Sophie’s classmates in St Gabriel’s in Dooradoyle, and, beside them again, a pink poster with messages written on love hearts by her heartbroken teachers.

Sophie was born on July 12, 2006 and in just over eight years, she has lived and experienced “a most extraordinary life”.

A small pair of boxing gloves which sit in the family living room in Rhebogue, and which have been with Sophie since her early days, Fr Madigan noted, now stand as a reminder of her determined fight for life.

On Thursday morning, moments before she passed away, Sophie opened her eyes and made one final connection with her mum Stacey, who brought her into this world.

“It was almost like she left on her terms and said her goodbye in her own way,” said Fr Madigan.

“She was a light in all our lives. Her sudden departure is not easy but her family said they would use this time to say thanks for her life.”

Sophie, he said, is now in a place of peace – a place of serenity, a place of rest, with no more sickness.”

A post on the website for Cycle 4 Sick Children, he said, summed up Sophie beautifully: “A beacon of inspiration and bravery has left us but Sophie will find her place in heaven to shine as the brightest star of all.”

Fr Madigan gave the last world to Sophie herself: “I believe if she was to say something to us today it would be: ‘Don’t worry about me – I am safely home. I am with my granddad, friends and many others and we are at peace’.

“To Liam, Stacey, Dion and Kayla, I’m sure she would say ‘thanks’ and would want you to live your life to the full, to enjoy every moment of it and to take care of each other.”

In a brief but moving tribute, before his daughter’s remains were carried from the cathedral, Sophie’s heartbroken father Liam thanked everyone who has supported his family over the last eight years and, finally, looking to his wife and two young children said: “To Stacey, Dion and Kayla, you are remarkable people and I’m so so proud to call you my family.”