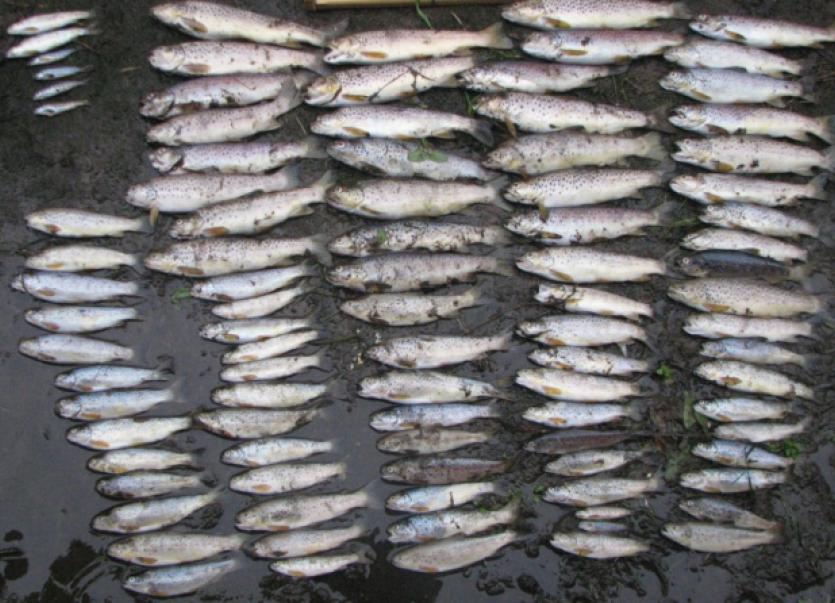 INLAND Fisheries Ireland are continuing to monitor the River Loobagh in Kilmallock following a slurry spill which resulted in an extensive fish kill last week.

INLAND Fisheries Ireland are continuing to monitor the River Loobagh in Kilmallock following a slurry spill which resulted in an extensive fish kill last week.

A series of samples were taken which have been sent for analysis. Pending the results of the analysis a decision will be made by IFI concerning a prosecution and any other legal actions that may be warranted.

On Monday, August 4, IFI received a report from local anglers in Kilmallock that the River Loobagh at Riversfield Bridge, near the Limerick County Council water treatment plant, was in a polluted condition and dead fish could be seen.

The River Loobagh is an important fishery, primarily for brown trout, but also for salmon which seemed to be returning to the river in small numbers.

“A discharge of effluent into the River Loobagh was located, and the source was traced to an over ground steel slurry tank on a nearby farm,” explained a spokesperson for IFI.

Once IFI contacted the farm owner, works immediately proceeded to prevent further discharge and the flow of effluent was intercepted at a number of locations, effectively preventing further discharge.

IFI staff carried out a visual inspection of the River Loobagh to determine the extent of the fish kill. Further to this, approximately 555 fish were observed to be dead, with an additional 95 fish found by the local angling club. The majority of the fish were brown trout, as well as a small number of juvenile salmon.

“IFI is continuing to work with both the farmer and Limerick County Council to ensure that no further pollution can arise and that all appropriate remedial action is taken. IFI will continue to monitor the situation and ensure that any pollution risk is removed,” continued the spokesperson.

“It was by pure accident I drove down to Riversfield bridge,” he said. “I looked in over it. I saw dead trout, trout dying and the colour and smell off of the river was something atrocious. It is only 100 metres from the water treatment plant,” said Mr O’Riordan.

“There were trout and salmon smolts which really annoyed the Fisheries Board because salmon are so scarce these days. Those fish that we took out were in less than 100 metres of water. You can see the foam on the water - it was absolutely atrocious. The river as we speak is so brown that we can’t ascertain how far down it’s gone,” he said at the time.

Inland Fisheries Ireland (IFI) has a confidential hotline number to enable members of the general public to report incidents -1890 34 74 24 or 1890 FISH 24. This phone line is designed to encourage the reporting of incidents of illegal fishing and water pollution.