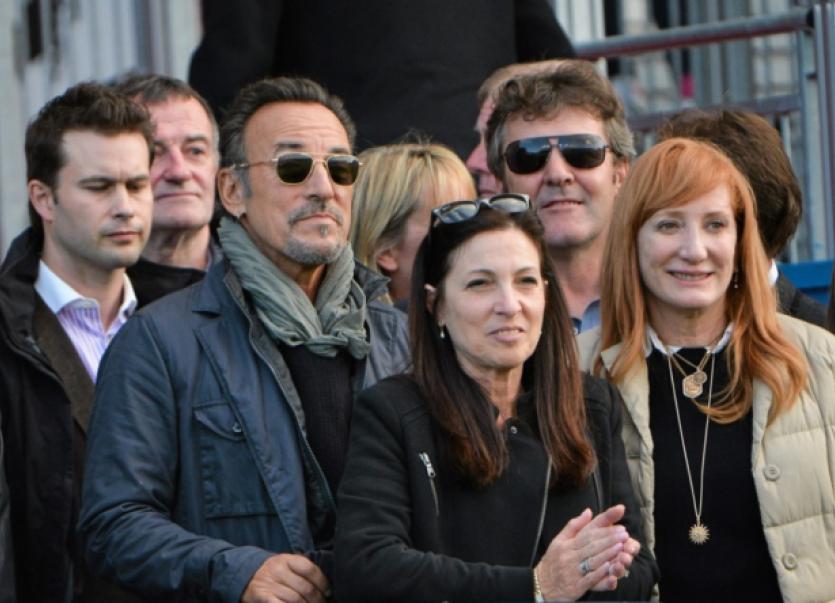 BRUCE Springsteen and his wife Patti Scialfa were “over the moon” to be in Dublin to see their daughter Jessica lift the coveted Aga Khan trophy according to Limerick-based horse trainer Enda Bolger who joined the couple in the RDS for the celebrations.

BRUCE Springsteen and his wife Patti Scialfa were “over the moon” to be in Dublin to see their daughter Jessica lift the coveted Aga Khan trophy according to Limerick-based horse trainer Enda Bolger who joined the couple in the RDS for the celebrations.

Jessica, 22, was part of the United States team which proved they were tougher than the rest on Friday edging out Great Britain in the Nations Cup.

“It is a massive achievement for her in her first Aga Khan and to jump two clear rounds. Her mother and father were over the moon for her,” Enda told the Leader this week.

The Bruree-based trainer who has been good friends with the Springsteens for several years joined the couple in the stands of the RDS on Friday along with Cork-based trainer Tom Busteed.

Jessica’s dad is well used to rocking the same arena having played there to sell-out crowds on numerous occasions down the years.

On Friday, however, he let his only daughter and her teammates’ showjumping skills do the talking.

“Anytime he was asked to be interviewed he declined because it was Jessie and the team’s moment,” said Enda.

With class and determination Jessica had a flawless first round. And she held her nerve to repeat her stunning performance in the second round.

At the end of the competition, her proud, smiling parents and their Irish friends made their way down the steps of the grandstand to the side railings to get a better view as President Michael D Higgins made the presentation of the Aga Khan trophy.

“Mum and dad were very, very proud of her,” said Enda. “It is the biggest competition in Europe, the Aga Khan. The jumps are maximum height and she jumped two clear rounds so it was an unbelievable achievement.”

Jessica, who has been horse-riding since she was four or five, “got a great buzz out of the win”.

“A lot of her team mates are of a similar age to her - it was a great team effort and occasion,” said Enda. “She has been on the circuit for the last three years between America and England. She has a good bit of experience behind her even though she is so young.”

Asked about her parents’ presence, she said she was really happy that they could come to watch. And she wasn’t the only one.

While the Irish spectators may have been disappointed with the performance by the home team, the sight of the music legend savouring a special family moment at the Anglesea Road arena lifted many spirits.

“It was great to have him there because it gave the whole show a good boost and it is great for showjumping that they are so keen and interested in it,” said Enda.

Bruce - who memorably rocked Limerick’s Thomond Park on a July night last summer - and his family enjoyed their time in Ireland so much that they extended their stay.

“Jessica is jumping in England this week again so they are staying over,” said Enda.

As for the Aga Khan celebrations, “we had a good time,” he smiled.