Newlyweds keep on truckin’ thanks to special wedding gift 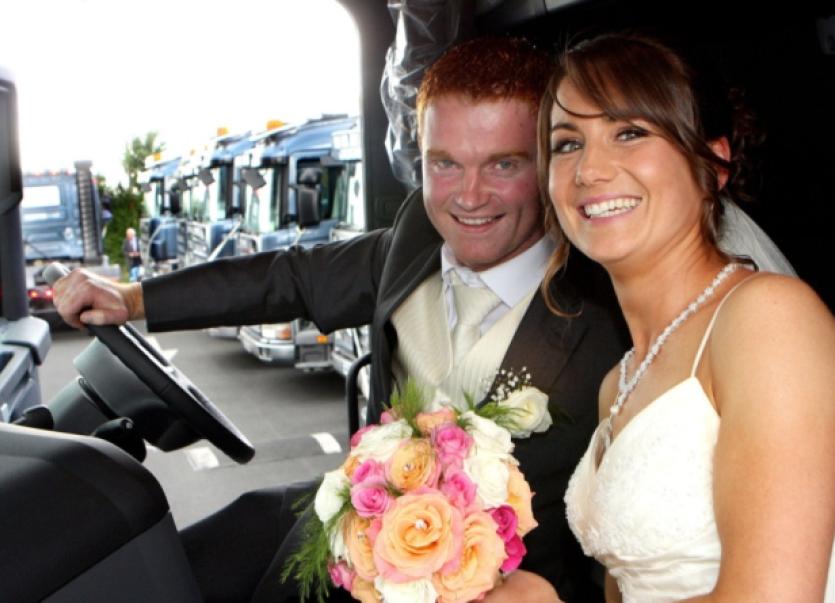 Most brides might dream of being whisked away to their receptions in a vintage Rolls Royce, or maybe a horse-drawn carriage, but for Martina Giltenane her wedding car was a 560 horsepower Scania truck.

Most brides might dream of being whisked away to their receptions in a vintage Rolls Royce, or maybe a horse-drawn carriage, but for Martina Giltenane her wedding car was a 560 horsepower Scania truck.

Mungret girl Martina’s marriage to Brian Fitzgerald in Crecora church at the weekend caused quite a stir when more than 20 trucks pulled up at the church and then drove in convoy to the reception in the Devon Inn, Templeglantine.

The newly-weds led the convoy in a brand new truck bought as a wedding present by Brian’s father Jim, owner of Carron’s Haulage, based in Kilcolman.

“It was a nice way to mark the occasion,” said Jim, who had the truck on order from Nolan’s in Castleisland several months beforehand.

He added that although Brian had found out about the gift prior to the wedding, due to a “leak of information”, he was thrilled with his unique gift.

“We had a great day and everything went off very well,” Jim said.

Martina works as a district nurse and plays ladies football with the Limerick county team while Brian works with the family haulage firm. They had been going out for about four years before the wedding in Saturday.

After the wedding in Crecora parish church, the couple drove to their reception in Templeglantine at the head of a convoy of some 22 trucks - most of them bearing the Carrons Haulage livery.

Needless to say it created quite a stir as it travelled the roads of West Limerick from Crecora to Templeglantine.

A traffic jam passing through Adare delayed the arrival of the wedding party by about an hour, but that did nothing to dampen the joy of the occasion.

“It was unbelievable. The local gardai in Newcastle West even stopped the traffic to let us through,” said a guest at the wedding.

“It was a mighty day and it all went off very well,” he added.

The bride and groom have now taken off for a tour of Asia on their honeymoon, but when they come they will also have another trip to look forward to. Last week, they won a prize of a trip to London worth €1,000 on local radio station Live 95FM.