Limerick GAA club in the money after night at the dogs 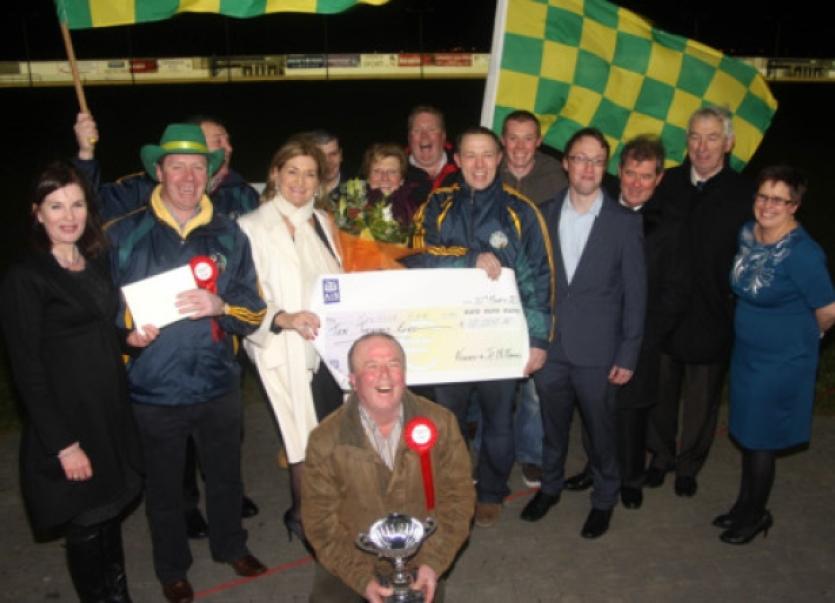 LADY luck smiled on Monagea GAA club at the weekend when they scooped â‚¬10,000 at Limerick Greyhound Stadium in the richest puppy stake in the world.

LADY luck smiled on Monagea GAA club at the weekend when they scooped â‚¬10,000 at Limerick Greyhound Stadium in the richest puppy stake in the world.

After a series of brilliant performances through the preliminaries, their nominated dog, Roxholme Bully produced an awesome display to win in the Con and Annie Kirby Memorial in Limerick on Saturday night.

With a total prize fund of â‚¬160,000, this is the richest event ever staged at an Irish greyhound stadium outside of Shelbourne Park and it is also the richest puppy stake in the world.

The event which is sponsored by Noreen and JP McManus, also offered local GAA clubs around the county the opportunity to share in a â‚¬20,000 nominatorâ€™s prize fund.

The winning nominator club, Monagea, were out in force at the track to cheer their winning pup home.

â€œWe had a good night - we had a big gang of supporters inside there so we made a night of it and went back to Strand afterwards for more celebrating,â€ explained Padraig Kennedy, assistant secretary of the club.

Roxholme Bully started as warm favourite for the â‚¬80,000 contest from a perfect draw on the fence and he was to make full use of it.

According to Padraig, the outcome looked good for the Owen McKenna-trained star as he had won every race in the lead up to the final, bar one.

â€œAfter the first night, our dog did the fastest time in there and we realised we had a good dog but we were just hoping. As time went on, we were getting more confident and going into the final we were hopeful that he would be in the first three anyway,â€ Padraig explained.

The son of Shaneboy Lee and Roxholme Sue was made to work hard, however, by the persistent Oran Maestro. The race was effectively decided in the early yards with Roxholme Bully coming away on terms with Kisses For Cloda and Oran Maestro.

As the latter edged inwards, Kisses For Cloda took a bump, which ended his chance.

The Hayley Keightley and PJ Cardosi-owned Roxholme Bully crossed the line with a length and a half to spare in a fantastic 28.35. Droopys Banner was a further two lengths away in third.

The event which commenced on March 1 with 86 greyhounds and 86 nominating GAA clubs from Limerick city and county culminated in a terrific night with record crowds - despite the cold weather - and the atmosphere was electric for the event.

The â‚¬10,000 prize money for Monagea will, according to Padraig, be put to very good use.