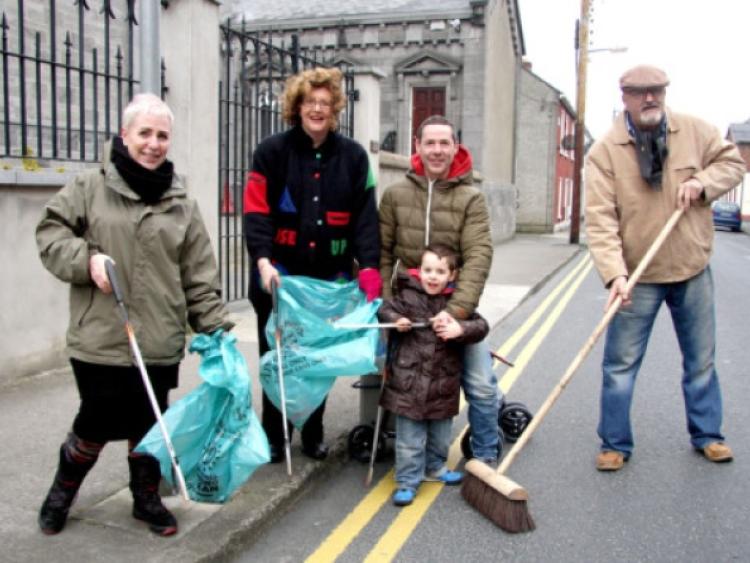 KEEN cleaners donned overalls, boots and collected their litter-pickers this week to give the south city centre area a much needed clean-up.

KEEN cleaners donned overalls, boots and collected their litter-pickers this week to give the south city centre area a much needed clean-up.

More than 30 volunteers gathered at St Josephâ€™s Church for the clean-up, which is being run by the newly formed South City Limerick Residents Association.

Despite the cold and blustery weather, Oâ€™Connell Avenue, St Josephâ€™s Street, Bowman Street, Wolfe Tone Street, and many other streets around the area were given a clean-up.

And for the next few Monday nights, further clean-ups of the area will take place.

St Josephâ€™s Street man Gerry Oâ€™Connell has been on a personal crusade to keep his neighbourhood clean for the last two years - and other residents have fallen in line with him.

He said keeping his area clean stopped him wallowing in self-pity after health problems confined him to hospital for a time two years ago.

The thing which caused him to sit up and take notice was, he says, when he saw two youngsters playing with what he initially thought was a balloon.

To his horror, however, they were actually blowing up a used condom, he explained.

â€œI stopped thinking about myself then, and started thinking: itâ€™s not good enough,â€ he explained.

In recent weeks, the new residents association has been formed, with one member, Eugene Ryan, saying: â€œWe decided: letâ€™s make our environment a bit better: deal with the issues of dog poo, graffiti, and have a bit of fun doing it, and improve our community.â€

The association also has plans to take part in other activities: they want to paint murals on some of the concrete walls, and also get involved in the Care and Repair scheme providing services to the elderly.

To this end, they have secured a â‚¬500 grant from the Limerick Leader-backed Going for Gold competition.

He said: â€œThe council cannot do everything: they cannot be everywhere all the time. It is good for the community to come together to make a difference, and lift the face value of the street.â€

Gus Clark, St Josephâ€™s Street, added: â€œThere is a good sense of community here. It is great to see the community coming out to do this.â€

The next clean-up takes place this Monday night, from 7pm, outside St Josephâ€™s Church.