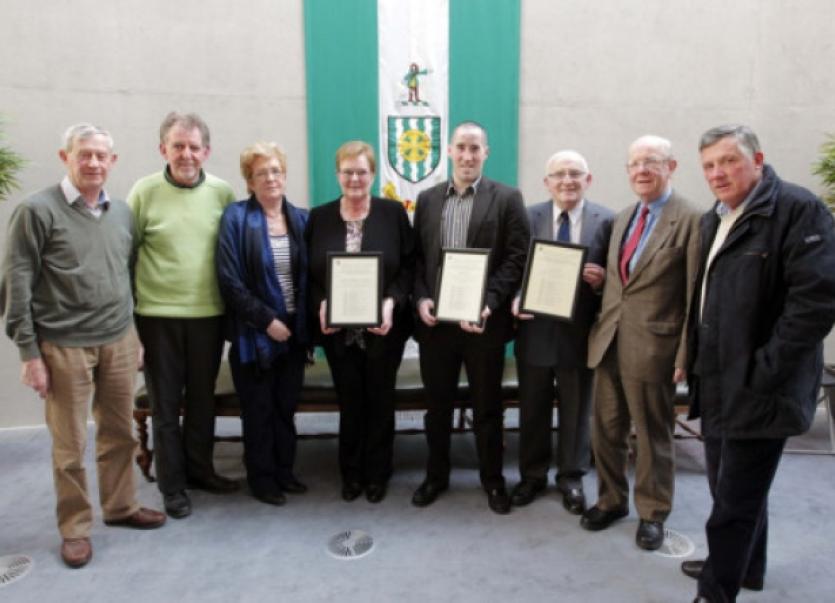 THE CIVIC recognition ceremony hosted by the Castleconnell electoral area celebrates those rowing in behind their community - in mores way than one.

THE CIVIC recognition ceremony hosted by the Castleconnell electoral area celebrates those rowing in behind their community - in mores way than one.

They were joined by friends and family at the upbeat ceremony that recognises members of the local community, who have contributed towards the betterment of their area.

Chairman of the Castleconnell electoral area committee, Cllr Eddie Wade, said he, fellow councillors and county council colleagues were delighted to be able to express their admiration and â€¨respect.

â€œWe are here to honour you on your achievements and your public spirit. Very often, we do not appreciate the efforts made by volunteers on our behalf.

â€œIt is often too easy to turn a blind eye and excuse ourselves from volunteering, perhaps because of our own busy schedules, yet our lives have been enriched by people such as yourselves who go that extra mile, give of themselves that little bit more,â€ said Cllr Wade, who proposed Mr Flavin.

He was Caherconlishâ€™s village maintenance employee for Limerick County Council for six years.

Mr Flavinâ€™s work ethic and commitment to the cleanliness of the village was second to none.

â€œHe worked tirelessly on behalf of the community and did a tremendous job in keeping Caherconlish clean and tidy,â€ said Cllr Wade.

The Millennium Centre committee have overseen the hall becoming a centre in East Limerick for every type of activity and function over the last 13 years.

Cllr John Egan proposed the committee for their â€œoutstanding workâ€.

It is so busy seven days a week that it needed an extension and renovation to keep up with demand.

The Department of Environment sanctioned Ballyhoura to approve funding of â‚¬351,521 for the works, which cost â‚¬468,695 in total, in December.

Margaret Ryan, secretary of Caherconlish/Caherline Community Council and a driving force of the committee, accepted the award on behalf of her colleagues.

A talented hurler and footballer with Ballybricken/Bohermore GAA and rugby player with Bruff, Shane had to quit field sports due to a degenerative eye condition.

Shane started rowing in 2007 under the tutelage of Joe Cunningham in Castleconnell Boat. Within two years of taking up the sport Shane was rowing for his country, culminating in qualifying for the Special Olympics last year.

Cllr Eddie wade said it gave him great pleasure to acknowledge the parts the three nominees have played in their communities.