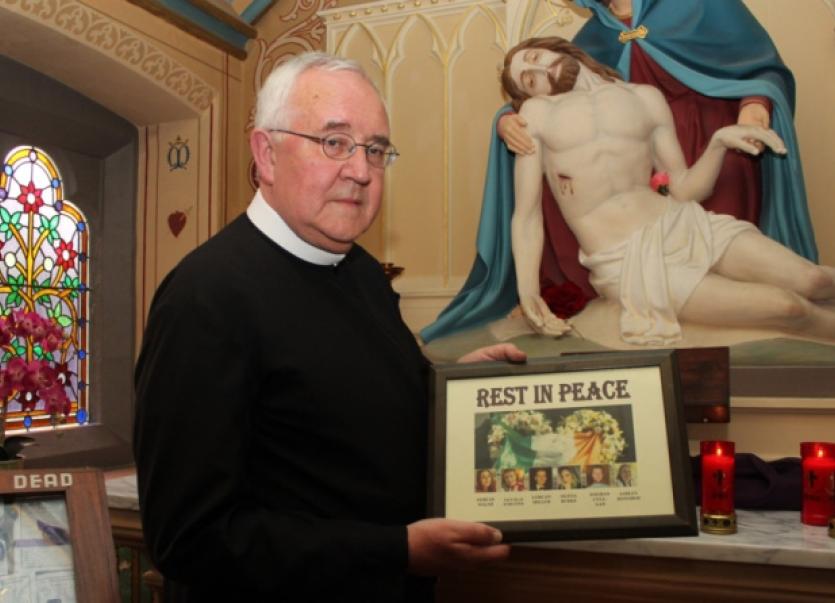 A SHRINE has been established in a Limerick church to remember the six young Irish students who died tragically in California this week when a balcony collapsed.

A SHRINE has been established in a Limerick church to remember the six young Irish students who died tragically in California this week when a balcony collapsed.

The Bishop of Limerick Brendan Leahy attended mass at the Redemptorists at Mount St Alphonsus this Wednesday lunchtime, and lit candles at the shrine, where the photographs of the deceased have been placed.

Fr Seamus Enright, rector at the Redemptorists, said the deaths are “just heartbreaking.

“It is really quite hard to find the words when something like this happens to describe how you feel. You have to wonder why bad things happen to good people. The only positive to come out of this is that you see the extraordinary generosity and empathy of Irish people, and we’ve seen that here today,” he told the Limerick Leader.

He said as the annual novena continues until this Saturday, the Irish students who lost their lives as well as their families and friends are in people’s thoughts and in the petitions they bring to the altar. “A lot of parents who have children living abroad feel it deeply - it has increased people’s anxiety levels when you’re separated from your loved ones,” he said.

While none of the students attended UL or are known to have any links to Limerick, flags were being flown at half mast in the University of Limerick campus on Wednesday to pay tribute to the six victims, while seven others remained seriously injured at the time of writing.

“All of the students involved in the tragic accident in Berkeley, California and their family and friends, are in the hearts and minds of the UL community at this time of loss.”

Colin Clarke, the UL students’ union president, added: “On behalf of all UL students I would like to offer our deepest sympathies to the families and friends of the students who so tragically lost their lives in Berkeley. Our thoughts and prayers are with all students who have been affected by this tragedy.”

Mr Clarke added that counselling services are available on campus if any student has been affected by this tragedy.

An online book of condolences has also been set up by Limerick City and County council. See limerick.ie/council

Three of the six deceased were attending University College Dublin, including two medicine students and one arts student.

The deceased are: Eimear Walsh (21), Niccolai Schuster (21), Lorcán Miller (21), Olivia Burke (21), Eoghan Culligan (21) and Ashley Donohoe (22). The latter was from Santa Rosa in the Bay Area, and was related to Olivia Burke. The other five victims were on a J1 visa for the summer.

The students, most of whom were from south Dublin and enrolled at UCD, fell from the fourth floor of a modern apartment building when a balcony collapsed at 12.40am on Tuesday after celebrating a 21st birthday.