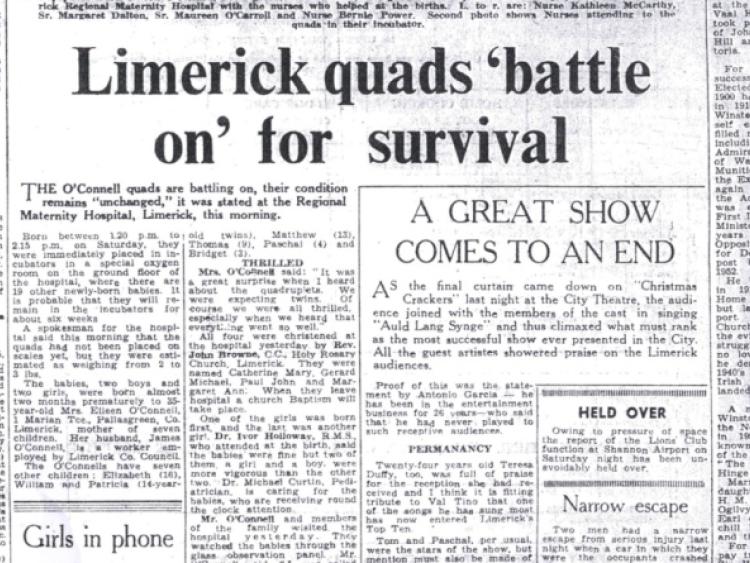 Limerick quads ‘battle on’ for survival – that was the headline in the Limerick Leader 50 years ago this week.

Limerick quads ‘battle on’ for survival – that was the headline in the Limerick Leader 50 years ago this week.

They battled, they survived and over the weekend Ger, Paul, Margaret and Catherine O’Connell, from Pallasgreen, marked turning two score and 10 years old.

They are Ireland’s first surviving quadruplets. Parents Eileen and James, already had seven children on their hands when the four were born in the Regional Maternity Hospital. They were expecting twins but the four arrived on January 23, 1965, almost two months premature.

The story captured the imagination of the county and country, and they made the news for years.

“I remember clearly the Irish Press and the Independent came out every year until we were about 14. Our 21st was a big one as well. The Progressive Democrats was founded around that time and Dessie O’Malley came out to the party in The Big Tree in Caherconlish. Our 40th was a great night too,” said Ger.

However, last weekend was decidedly low key as two of their older brothers – Matt and Tommy – died within weeks of each other near end of 2014.

“It was a very nice family occasion but tinged with sadness with the bereavements. Matt was a great man for catering. He arranged our 21st and 40th birthday parties.

“He would have been right in the middle of it and Tommy would have come back from London,” said Ger. A meal was enjoyed on Friday night with their older siblings Bill, Paschal, Liz and Brid and extended families. Paddy died in the Eighties.

Then on Saturday evening they met up in the Daughters of Charity in Lisnagry, where Catherine lives.

“The staff were very good. They put on a spread for us and we had a bit of a party. She is getting tremendous care there. I can’t say enough about the staff,” said Ger.

Dad James passed away in the Seventies while Eileen died in 2009 at the fine age of 83. The odds of having quadruplets is said to be 700,000 to one and Eileen must have been a mum in a million to raise quads and their seven older siblings.

“There was no modern medicine that time. I just don’t know how she went through it. There was a set of twins there already and seven in the family before we came along,” said Ger. If it is one in 700,000 to have quads then what are the odds of two sets being born in nearby parishes? But that is what happened this year when James and Grace became the proud parents of Lucas, Amelia, Mollie and Lily.

“I’ve spoken to James and we’re definitely going to meet up with the quads of Caherconlish. That will be nice to mark the uniqueness of two sets of quads. Hopefully we can arrange it as soon as the weather gets warmer,” said Ger.

Their 50th birthday was “sad in one sense” said Ger but it was important to mark it. Not least in 50 years time when future journalists and researchers are scouring through the Leader’s archives.

Ger wished to take this opportunity to thank the palliative care team from Milford Care Centre who looked after his brother Matt so well in his home.

“They were like angels coming down to look after him,” said Ger.