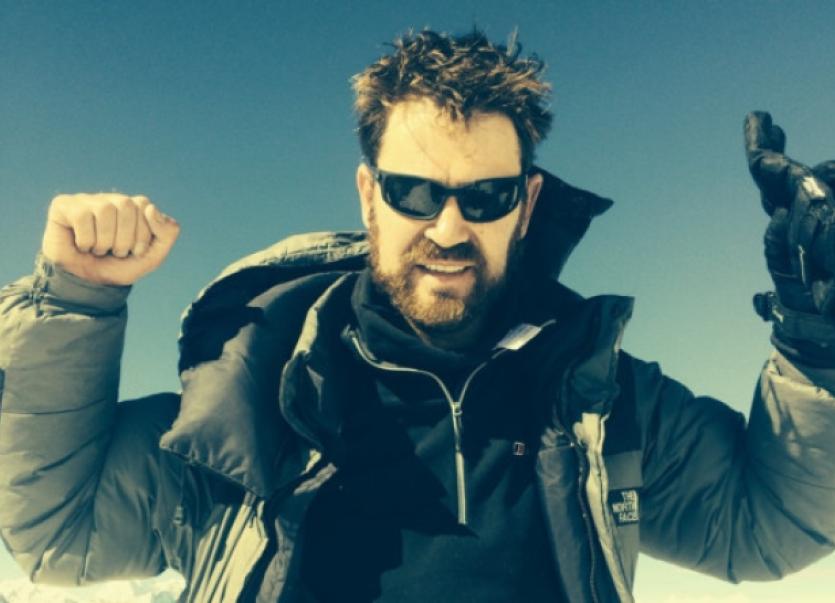 Cyclones, cows, yaks and altitude sickness were just some of the challenges that Limerickman Denis Quilty faced in climbing Island Peak, a 6,189-metre mountain in the Himalayas.

Cyclones, cows, yaks and altitude sickness were just some of the challenges that Limerickman Denis Quilty faced in climbing Island Peak, a 6,189-metre mountain in the Himalayas.

After 12 months of training, the 39-year-old Pallaskenry native finally realised his goal this month.

The son of Pat and May Quilty, Denis only took up climbing in 2012, but he has already climbed Kilimanjaro in Africa (5895m) and Mount Elbrus in Russia (5642m), the highest peaks in their respective continents. However, at over 6,000 metres, Island Peak was his biggest challenge to date.

“Once you get above 6,000 metres, the air is thinner, you are struggling for breath – it is extremely tough,” said Denis, who currently works as a bank executive in the Channel Islands.

Together with his team mates, Fergus and Oisin McDevitt from Wicklow, Denis began his ascent the previous Sunday. It was originally scheduled to take a full six days, but the threat of a cyclone blowing in from India forced them to skip a planned rest day and aim for the summit a day earlier.

After four days of trekking, they arrived at base camp on Thursday, had a few hours rest, and then set off for the summit at midnight. Nine hours later, Denis finally realised his aim of standing on the peak.

“The last 400 metres was the most technical part of the climb involving crampons, ice climbing using ice axes along with Jumaring up ropes to get to the summit,” he explained.

“It is magical, absolutely magical,” he said of that moment.

After taking time to marvel at his surroundings, it was time for the descent - the most dangerous part of any climb.

This involved abseiling back down to basecamp and then walking back to the base of the mountain, taking care along the way to avoid pack-laden yaks and cows along the way.

Unsurprisingly, his mother was happy – not to mention relieved – when he phoned her to say he had successfully completed the climb.

“I spoke to my mother afterwards and she said, ‘So that will be the last one you’ll do? I said yes, but when you get the bug for these things it is hard to let go,” Denis commented.

However, he does acknowledge that the 6000-metre-plus climb was a major test, both physically and mentally.

“At the time, it was horrible because you are feeling sick, exhausted, there is a lack of air,” he said.

“But the mind is brilliant because you forget about the suffering and you just remember the sense of achievement.

“It was extremely tough - I will have to think very hard about whether I would do another one,” he added.

Having said that, he noted that Fergus McDevitt had begun to plan an expedition to Aconcagua, the highest peak in South America, which stands at 6,960 metres. Probably best not to mention that to his mum!