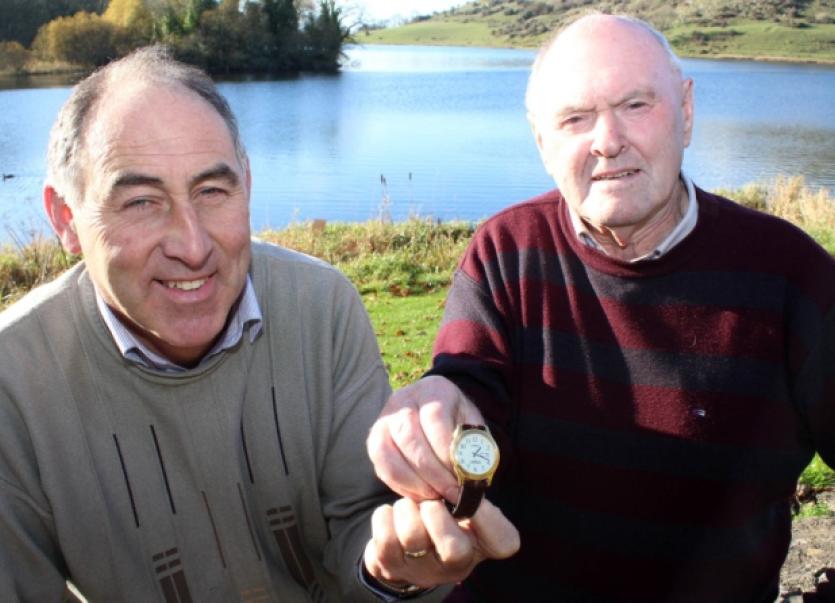 A GENTLEMAN who lost his watch and wedding ring while out walking his dog at scenic Lough Gur has been reunited with his prized possessions – thanks to an article on the Limerick Leader.

A GENTLEMAN who lost his watch and wedding ring while out walking his dog at scenic Lough Gur has been reunited with his prized possessions – thanks to an article on the Limerick Leader.

It was reported in last week’s edition how the secretary of Kilmallock GAA club, John O’Donnell, came across an important find in the historic area of Lough Gur on Wednesday afternoon.

While in the car park at Lough Gur he spotted a gent’s gold wedding band and watch.

“It would fit my own finger fine, but I would like to return it to the owner - I am sure he is very perturbed at losing it,” said John in the Leader last week.

The Kilmallock resident was able to read an inscription including the day, month, year and initials TH and MF quite clearly on the wedding band. The watch, a gent’s Lumibrite, and was attached to the wedding ring.

“I am not sure of the monetary value but I am sure the owner would be very anxious to have them returned,” said John last week.

And following the publication of his discovery, in the Leader, the puzzle was solved.

Tom Hickey was at home in Lough Gur reading the paper, for a second time, when his eyes fixed on a small article at the top of page 15 entitled: Watch and wedding band found.

“I didn’t miss them for a couple of days. And then when I saw the Leader I realised I didn’t have them - the whole lot was gone,” Tom explained.

“I was delighted to get them back. I was out walking our young dog. Of course I had the watch in my pocket and I probably pulled it out when I was pulling out the lead. I had the ring around the watch,” he recalled.

As a coincidence, Tom lost his original wedding band around five years ago.

“I could never get it back. My wife got another ring for me and then I lost it below at the lake,” said Tom who said he is very grateful to John O’Donnell for his assistance in getting the items back.

“I went up and collected them from John’s wife. It was great to get them. John got the appeal on the Leader very fast, fair play to him.”

John, meanwhile, was more than happy to be of assistance.

“I wasn’t able to read the inscription on my own ring because it is so worn so I thought it was either a new band or the person didn’t wear it at all. It turns out his wife Mary had bought him a new one. They are thrilled to get them back and I was only glad to help.”