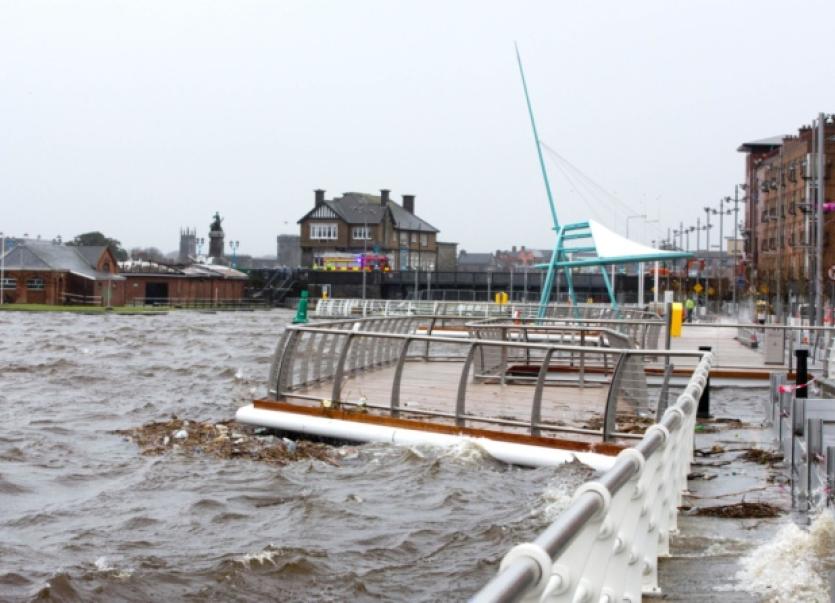 HIGH tide has passed in Limerick this Wednesday evening without reaching the levels that saw major flooding in the city recently.

HIGH tide has passed in Limerick this Wednesday evening without reaching the levels that saw major flooding in the city recently.

Pat Lysaght of Corbally conservation group said shortly before 6pm this evening - after high tide of 5.30pm - that the tide was “receding”.

“It is looking good. The tide has receded and the wind has died down a bit, although it is still quite squally. The river was a half meter away from the same situation as they had in the Island Field last Saturday week. The tide is very high but is holding its own. It is at about the 7.5m mark - to put that in perspective, the highest record height was 8.5m in 1961.

“It is holding at that height but we expect it to recede shortly after 6pm,” he added.

The wild gusts that caused huge damage across Limerick city and county appear to have slightly receded also. However, a national ‘status red’ warning remains in effect, with a wind warning in place for Munster and “violent winds” predicted this evening.

Up to 34,000 homes across the region remain without power, while a large number of roads - including across Sarsfield Bridge in the city - remain closed.

University Hospital Limerick is attempting to free up to 50 beds for the expected influx of patients arising as a result of the storm.

Schools across Limerick closed early this Wednesday and students were not allowed to travel home alone.

Major damage was suffered at the 139 year old Limerick Boat Club in the city, which has been described as “unsalvageable” after its roof was ripped off by the high winds.

Two lorries overturned in Limerick, one at Coolanoran - between Rathkeale and Newcastle West - and one on the Croom bypass but no serious injuries were reported.

In Annacotty, a Limerick City and County Council worker was hospitalised after being hit by a falling branch.

A school bus carrying 50 primary school students had to be escorted by gardai as debris from Wednesday’s devastating storm battered the vehicle on its way from Kilmallock to Bruff.

For more on all of these stories, see the print editions of the Limerick Leader, which will feature extensive storm coverage and will be in shops tomorrow morning.

For more on this, stay with the Limerick Leader online and on Twitter.