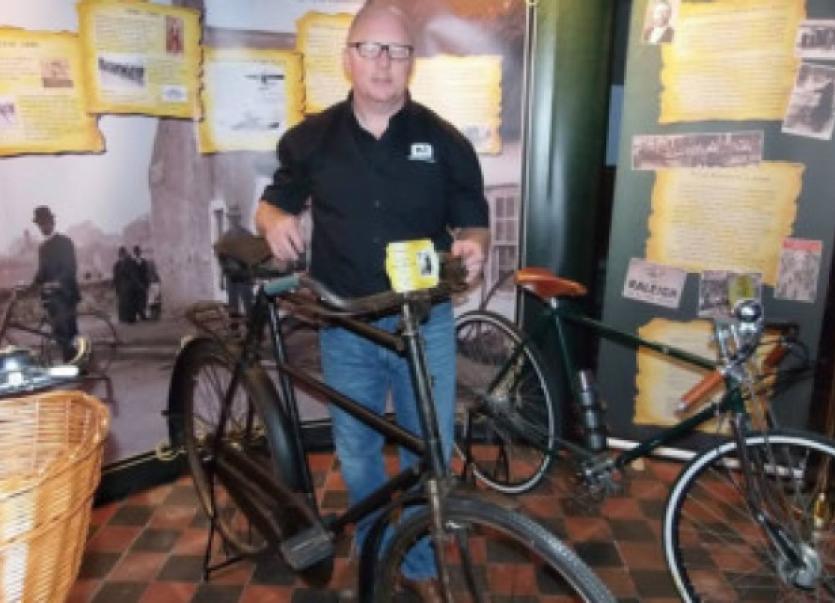 A CHAIN of events led a Cappamore company to the iconic high nelly used by Michael Collins during the War of Independence.

A CHAIN of events led a Cappamore company to the iconic high nelly used by Michael Collins during the War of Independence.

The original 1919 Rudge Whitworth deluxe double bar bicycle was found only a few weeks ago by Marty Mannering of GoEco.

Marty and his team spent seven months looking for the custom made bicycle which has two crossbars.

“We started in Clonakilty in the Michael Collins Museum but they didn’t know where it was,” said Marty.

The sleuth then interviewed a number of people including Michael Collins’ grand-niece Mary Bannotti.

“I was told as far as the museum was aware that a priest had the bike in Clonakilty. He was the last known person to have it.

“We went down the line of trying to establish who this priest was and this led us to the person who now owns the bike,” said Marty.

They wish to remain anonymous but they kept the bike in immaculate condition, says Marty.

“His family, the Michael Collins Museum, and Rudge Whitworth, are all happy it is the original bike. It matches all photographic evidence and we haven’t had anyone contradict us,” said Marty.

Marty got a loan of it for a month and is certainly making the most of it. He displayed it at the Elemental festival in Limerick and at the Doon Vintage Show where it drew interested crowds at the piece of history in their midst.

This week it was at the National Ploughing Championships and Ryan Tubridy was due to call to the stand.

Mary Bannotti was delighted that the bike has been found and thinks it’s a nice idea to bring the bike around the country.

I think, for him, being anonymous and unrecognisable was vital. The bicycle, ironically, turned out to be the safest form of transport. The high nelly was the bike of choice at the time,” said the former MEP.

The next stop on the bike’s tour is The Quiet Man festival in October in Mayo.

“We’re looking for the tandem used by Maureen O’Hara and John Wayne in The Quiet Man. We hope to use it as part of an educational tour of schools and for a documentary we are filming at the moment,” said Marty.

Continuing the movie theme, they were asked to build and provide over 30 high nellys for a new film called Jimmy’s Hall.

Ken Loach directs the film about Irish socialist Jim Gralton and the hall he used as a political rallying point in 1932.

As GoEco restore and refurbish high nelly parts and sell them all over the world they were able to help the company out and look forward to seeing the bikes restored in County Limerick on the big screen next year.