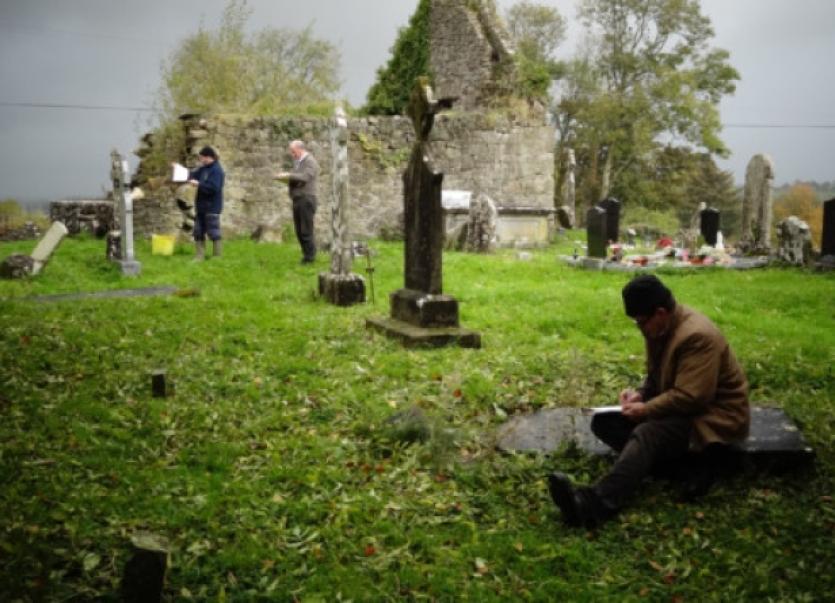 THE results of a year long survey of 70 graveyards in the Ballyhoura Region has gone on public display.

THE results of a year long survey of 70 graveyards in the Ballyhoura Region has gone on public display.

Over the past 12 months almost 70 graveyards in the Ballyhoura Region have been surveyed and recorded as part of the Historic Graves Survey project.

“This project, the brainchild of John Tierney of Eachtra Archaeological Services, began in this region in March 2012 and due to massive interest and support has been able to continue through the work of community archaeologists Colum Hardy and Will O’ Shea and Doreen Mcelligott, transcriber to Historic Graves website and indeed dedication from an army of volunteers from the Ballyhoura Region,” explained Amanda Slattery, Tourism and Heritage Officer, Ballyhoura Development Ltd.

The work has built up a huge genealogical repository of information for the region and is being availed of by people all over the world who have traced their roots to the area and are in contact through the Ireland Reaching Out project and the Gathering.

There was also a special rambling house in Davy’s Cottage to mark the occasion after the exhibition opened at Ballinvreena Community Centre.

The exhibition will be made available to groups who wish to include it at their gatherings, reunions, or events this year.

The digital surveys are available to view for free on historicgraves.ie.