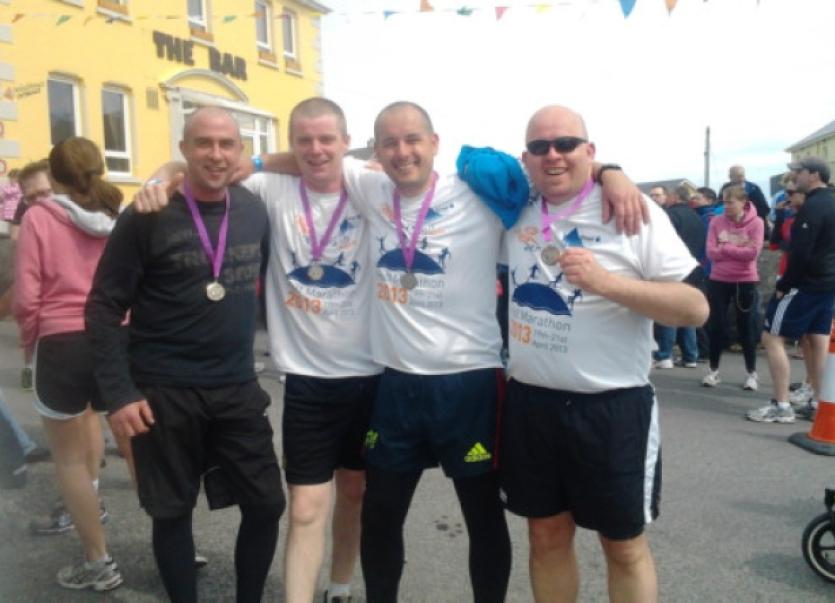 THREE Limerick amateur athletes went the extra mile to run a half marathon for the first time in aid of Temple Street Children’s Hospital.

THREE Limerick amateur athletes went the extra mile to run a half marathon for the first time in aid of Temple Street Children’s Hospital.

Cappamore natives Kieran Hickey, Ger Bourke and Seamus Ryan along with their friend from Cork Ray Walsh, were among 200 people who took part in the 2013 Aer Arann Half Marathon. The hospital requires €60,000 to purchase four state-of-the-art high-tech surgical units.

Each participant had to raise €650 each in order to take part in the event held on Inis Mor. The East Limerick group organised a number of fundraising activities over the past few months including a hugely successful forestry walk last Stephen’s Day in Cappamore, bucket collections on the streets of Dublin and an Easter tea party and cake sale, organised by Seamus’ sister Aileen who lives in Switzerland.

“People were so generous with their donations in such tough financial times, we have raised nearly €4,000 to date with more to come in hopefully,” explained Seamus.

The friends, who had never ran this far before, got a warm welcome and huge encouragement from the locals which would help when the going got tough later in the race.

“11.30am was start time for runners, we wished each other luck and set off on our 21km journey. It wasn’t long before we realised that hills were going to be the order of the day. The locals were great for support and encouragement, every child from the island was out with the water bottles which were greatly appreciated in the 14 degrees of sunshine,” said Seamus.

“The last three miles proved quite testing both mentally and physically as this was unknown distance to the four of us. Every last km brought another blister and injury but adrenaline and the sense of achievement brought us all over the finish line in just over two hours.

Considering that neither of us are athletes we were delighted with our achievement and raising so much money for such an amazing charity made it very special indeed,” said Seamus.

“The bodies will be sore for a few days but already plans are underway for our next event to help those amazing children who attend Temple Street Children’s Hospital,” Seamus vowed.

Seamus thanked his three friends for joining him on the half marathon and he thanked the local community in Cappamore in particular those who sponsored the men, the Cappamore agricultural show committee for their kind donation and to everyone who wished them well.

“Lastly, I would like to thank my son Donnacha, who was my inspiration for this race,” Seamus said. “I’m looking forward to the day we can maybe run this race together.”

If you wish to contribute to the Temple Street fund, you can log onto mycharity.ie to sponsor Seamus Ryan (Change for Children group) or people can make a donation directly to Ger Bourke, Kieran Hickey or Seamus Ryan.